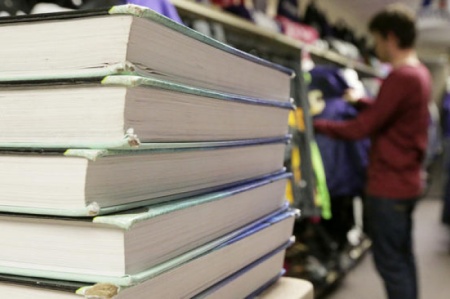 “You are either a consolidator or you get consolidated,” said Ray Griffith, Follett’s president and chief executive. “Follett and the board of directors, which are members of the family that has owned the company for 142 years, have decided to be aggressive in the growth and demonstrate its commitment to the industry.”

Charlotte, N.C.-based Baker & Taylor is a distributor to public libraries and institutions and a wholesaler to retailers world-wide.

Follett, of Westchester, Ill., is best known for managing 1,200 college and university bookstores nationwide, including those at Stanford University and the University of Massachusetts at Amherst, among others. It also provides technology, services, print and digital content to prekindergarten through grade 12 libraries, schools and higher-education institutions.

In addition to providing customers access to content from publishers and sources, the two companies offer library management and collection development technology tools to public and school libraries.

Follett said in a news release that the acquisition, its fifth and largest, will leverage the two companies’ technologies and other capabilities to drive further innovation. Follett added the two businesses generate combined sales of $3.6 billion.

Mr. Griffith of Follett said there are opportunities to consolidate services Follett and Baker & Taylor provide, currently offered independently despite serving the same community of libraries.

“We believe we can use the combined experience to go to the library community and create advantages for them,” Mr. Griffith said. “It is what they’ve been wanting and need. And we can help [them save] them money, use resources better and invest their money better for students’ outcome.”

The physical book sector has faced disruption in recent years with new digital technologies affecting not only the way readers read but also how they access content. To be economically viable, some participants have been consolidating to gain scale or shedding noncore units.

Publisher Penguin Random House late last year sold Author Solutions, a self-publishing unit it bought in 2012 from private-equity firm Bertram Capital Management LLC, to an affiliate of Najafi Cos., a Phoenix-based private-equity firm. It said in a news release at the time that the sale reaffirmed its “focus on consumer book publishing through our 250 imprints world-wide.”

Castle Harlan was founded in 1987 and has raised five private-equity funds in the U.S. and three in Australia, with capital commitments totaling $6 billion.

The firm, which also has offices in Sydney and Singapore, has hit the pause button on raising additional private-equity capital, having “simply ceased efforts for the time being to raise a new fund,” according to an emailed statement by a spokesman.

The spokesman added that Castle Harlan will devote its energy to managing the several remaining portfolio companies in its two current funds, and “attempt to maximize their returns over the next several years as they bring these investments to realization.” Apart from Fund IV, Castle Harlan is also managing Castle Harlan Partners V LP, which collected $800 million in 2010.

“The company itself has no plans to discontinue its business,” it added.