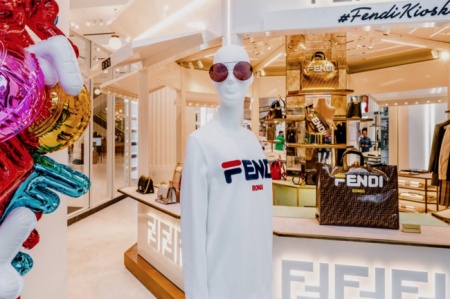 As of July 30, there’s a Fendi pop-up at Selfridges‘ The Corner Shop on Oxford Street. It’s in the special pop-up space that’s quickly becoming one of Europe’s most interesting venues for quirky fashion launches. The launch is via the Italian luxe brand’s Fendi Kiosk concept that has seen it launching pop-ups globally with a less ‘stuffy’ approach to luxury retail that should appeal to the all-important Millennial customer.

Meanwhile,  Red Valentino has unveiled a limited edition capsule collection exclusively created for the retailer’s Oxford Street, London, flagship as well as its webstore. The collection is showcased in a dedicated pop-up area situated in the contemporary studio, on the third floor of the London branch. The retailer said that the pieces, created by Valentino creative chief Pierpaolo Piccioli, are “dedicated to a sophisticated, ultra feminine and rock ideal of a passionate and irreverent young woman.” The capsule comprises 11 “key pieces” spanning knitwear, jersey, outerwear, tops and dresses, all of which are characterised by the Red Valentino recurring shades of nude, ivory and black.Decorative patterns, warm yarns, tulle, point d’esprit, ruching, and pussy bows are some of the unifying symbols featured throughout the collection.

Meanwhile, newly-launched Italian accessory brand Medea is now available at the store, offering high-end leather box totes.The brand is known for its structured leather shoppers that act “as a blank canvas for colour and artistic collaboration, uniting its founders’ aesthetic worlds between New York and Milan.”

The line-up includes a vibrant selection of monochrome leather bags alongside limited-edition art pieces featuring the work of well-known artists and photographers from around the world. The first collection features the Prima bag in four sizes: Short, Tall, Grande and Venti, all made in Italy from matte calfskin in a selection of primary colours, from black and white to red, yellow, pink, teal, burgundy and blue. The brand was founded by twin sisters Camilla and Giulia Venturini, and named after Pasolini’s 1969 film. Other major launches at the store this summer include its collaboration with Lily Cole’s Wires brand for a pop-up store and Réalisation Par, the popular womenswear brand that has quickly developed a huge Instagram following. It has launched a UK-exclusive pop-up at Selfridges, with 13 exclusive styles in red, pink and tiger stripe, available in-store now.