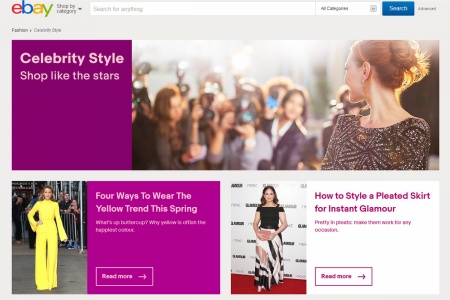 Following hot on the trail of its tie up with media outlet Mashable to let shopper ‘shop the look’, eBay is rolling out a similar offering with Time Inc based around celebrities called ‘Shop the Celebrity Look’.

Its new AI-powered Shop the Celebrity Look service allows shoppers to point their phones at bespoke fashion articles in Time’s publications and buy the clothes that the celebs therein are sporting – or find similar items suited to a more proletarian budget.

The system is driven by AI technology developed by eBay and, rather than offering a pre-selected set of products on offer via the site, it claims to genuinely match the items in the images to the same ones on sales via eBay or ones that are very similar.

The move follows a similar deal with techy outlet Mashable to offer a service that allowed Mashable readers to shop, browse and purchase products matching those featured on Mashable – all without ever leaving the Mashable site. The same is now going to happen within Time Inc publications.

Each article will be based on a particular trend and feature four shoppable images of celebrities sporting the style. Using eBay’s adapted ‘Shop the Look’ technology launched in 2016, consumers will be able to hover over the celebrity images and click on the shopping tags to find the matching items on eBay, or affordable alternatives.

This launch is a global first for the marketplace and is part of eBay’s ongoing commitment to building an engaging and creative shopping experience for its consumers. The technology was developed by eBay’s Fashion Team – compared with the Mashable trial which was engineered by eBay’s Marketing Lab.

The move adds to eBay’s growing roster of tie ups with media companies to start to bypass search and even using eBay directly, to a world where shoppers see something they like, point their phone at it and are able to buy it – for now from eBay.

For retailers and brands this is the second of what we can only assume will be many similar tie-ups between media and the marketplace to change the way people shop – and that has huge implications for retailers.

First of all, this is eBay taking a step away from selling goods through its own site and allowing a third party to do it via eBay. This changes the dynamic between media, marketing, brand, retailer and marketplace and offers consumers a much more simple way to shop while they are doing something else.

Secondly, the move by eBay marks a shift towards ‘distributed marketplaces’, where shoppers can shop whenever and wherever the mood takes them rather than having to search – either with a search engine, a marketplace or even a specific retailer and brand app – and buy what they want when they want.

This fundamentally changes where the retailers and brands sit in the shopping journey. Suddenly, they are merely a provider that will be selected on availability and closest match to what is being searched for.

It also fundamentally shakes up delivery, as the immediacy of ‘see it, mobile it, buy it’ will also see shoppers wanting to have the goods then waiting for them when they get home or to work – which luckily, is a technology that JD.com is offering to the world of retail as of Thursday 15 March.

The move is cleary the start of a new push by eBay to tap into a new way to shop and on the face of it could well give the likes of Amazon a run for its money. It could also have a massive impact on retail and brand ecommerce, forcing retailers and brands to have to use eBay if they want to stand a chance of being seen in this new shopping paradigm.