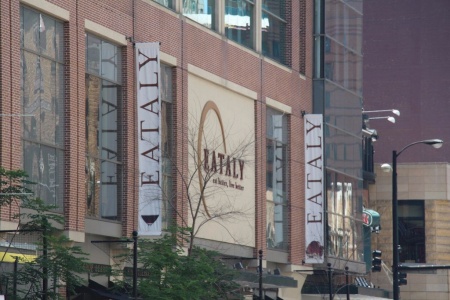 Canada’s first Eataly outlet will open at the Manulife Centre opposite Holt Renfrew in Yorkville in early 2019, as part of a $100-million renovation of the complex.

“We’ve been looking for a location in Toronto for two years, and we decided this was the right one because of it being one of the major traffic points in the city,” said Luca Baffigo, co-CEO of Eataly Italia, an upscale retailer of Italian food and home products.

The redevelopment will take advantage of the existing wide frontage on Bloor St. and add 35,000 square feet of retail space to the existing 40 shops in the building.

Eataly, which bills itself as an Italian food marketplace that includes eateries, will span 50,000 square feet across three storeys.

Marquee tenants, including William Ashley, Birks, Cineplex and Indigo will remain in the building, although the size and locations may switch up, and new tenants will be added, said Kevin Adolphe, president and chief executive officer of Manulife Real Estate, which owns the property at 55 Bloor St. W.

“The Bay-Bloor area is really being transformed and we just see this as a tremendous opportunity to participate in the major transformation,” said Adolphe.

Stores will continue to operate during the redevelopment, which will include a complete overhaul of the exterior, adding a glass façade.

“I don’t think I can think of another restaurant that has as much coolness and sex appeal around right now in the marketplace. (Eataly) belongs in Yorkville for sure. The fact that they’re going to become my new neighbour — bring it on. Traffic is business, is the way I look at it as a retailer.”

Joel Gregoire, senior food and drink analyst at Mintel, compared it to the partnership between Pusateri’s and Saks Fifth Avenue, combining to create a destination for shoppers seeking luxury items and high quality food.

“There’s been a fair amount of buzz when it comes to Eataly’s arrival, and centralizing it in the Yorkville area, which also serves as a tourist destination, seems to be a good fit for Eataly and for the neighbourhood,” said Gregoire.

He said partnering with the Selfridges Group and Terroni Restaurants, leveraging their existing expertise in the Toronto market, was a wise move.

Eataly first opened in Turin in 2007, and is known as a place to shop for high-quality ingredients as well as sit down for a meal or take courses on food, wine and nutrition. It has 30 locations worldwide.

Analyst Kevin Grier said Eataly has chosen a location in the right place to reach people with the income and interest in upscale food.

Lidl's expansion plans in the US