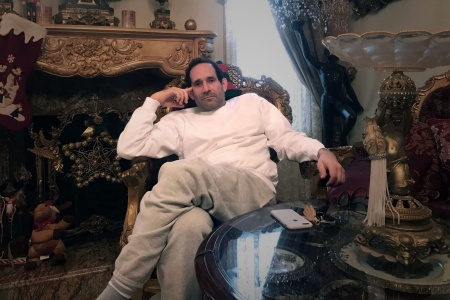 Dov Charney has a proposition. “Do you wanna FaceTime?”

The reporter he’s talking to this morning has just a few follow-up questions, but Charney has something more exciting in mind. As the video call fires up, he shows off his Los Angeles living space — the walls filled with taped-up papers, his clothes folded onto an Ikea bookshelf. Charney’s signature mutton chops and 80s-style aviator eyewear are nowhere to be seen. His dark hair and scant beard are flecked with grey. He’s smiling — grinning, really. There’s a fervor.

Then Charney gets to what he really wants to show… and for anyone thinking about the American Apparel founder’s checkered reputation, don’t worry: it’s more captivating — not to mention more wholesome — than you might think.

It turns out the bedroom is little more than a bivouac. It’s set up so that Charney can spend days and nights in this building. The real action is beyond the bedroom door, which opens onto a vast, light-filled space where massive, state-of-the-art machines hum with activity. The realization quickly sets in: This is a garment factory — specifically, it’s the home of Los Angeles Apparel, Charney’s new venture.

“This is from Europe. It’s the best,” Charney says of one machine, navigating among the workers moving across the factory floor. “A lot of these people I know, they worked for me at American Apparel.”

“Seven,” says another, followed by, “Twelve.”

One man flashes his palms twice, then makes the number-one sign with his index finger: “Twenty-one.”

American Apparel, of course, is the apparel company Charney founded almost 30 years ago as a young Canadian carried away by a lifelong obsession with American-made cotton T-shirts. The company whose fledgling wholesale business he transformed into a trendsetting fashion brand and global retail empire with hundreds of millions of dollars in annual sales. The company that prided itself on its immigrant labor, domestic manufacturing and good wages.

But it was also the company whose sexually charged marketing — not to mention its CEO’s personal behavior — polarized the very public it wanted to buy its product. The company whose Shakespearean rise and fall became one of the biggest business stories for over a decade. The company that ultimately ousted Charney in 2014 amid accusations of financial improprieties and sexual harassment. And, ultimately, the company he watched stumble, fall into the ether and become just a shell of its former self — a brand in name only, its U.S. manufacturing base and retail stores effectively abandoned after Canadian T-shirt maker Gildan acquired the company at a January 2017 bankruptcy auction for a mere $88 million.

American Apparel is far from the only company to succumb to the mounting pressures facing so many apparel retailers, especially in recent months. The Limited, Wet Seal and BCBG Max Azria all fell victim to changing consumer tastes and shopping patterns in the first quarter of 2017 alone. But American Apparel stands out. For nearly 30 years, the company provided a steady stream of high-quality basics and edgy styles to worldly urbanites who had no use for the logo-laden clothes favored by suburban teens. Charney’s unique approaches to fashion, manufacturing, marketing and retail drove the brand’s rapid ascent to the top of the apparel world in the mid-2000s.

The company eventually crumbled in spectacular fashion under the growing pressures of its precipitous rise, accelerated by the Great Recession and its own rather peculiar set of problems. And one cannot escape Charney’s personal troubles when talking about American Apparel’s downfall. Several ex-employees filed lawsuits over the years accusing him of sexual assault and harassment — lurid and disturbing accusations that would eventually underpin his removal as CEO.

The real story of who is to blame for American Apparel’s downfall — and whether there’s truth to the allegations against Charney — played out in a rather public tug of war. While the company’s management disparaged his behavior in the press and in courtrooms, Charney has always sought to be the master of his own narrative. He denies the accusations outright and insists they were merely a pretense for his ouster, noting the company’s board acted on them long after they were news. At the time of his firing, Charney believes, American Apparel was poised for a comeback; he just never got the chance to make it happen. American Apparel ultimately unraveled without him — and a dark cloud still lingers over his reputation.

Now Charney’s starting over. He has a new venture — Los Angeles Apparel. At first blush, the company continues right where American Apparel left off. Charney’s essential approach remains unchanged, and he maintains the same unwavering confidence that young urbanites represent a niche market that will translate into hundreds of millions in apparel sales.

But even the name of the company hints at some differences. “America” is now Donald Trump’s America — and for Charney, “Los Angeles” is an antidote to that: A diverse city of strivers and the birthplace of the gritty style that won Charney over decades ago.

“Los Angeles is one of the most exciting places in the country for manufacturing, for culture, and despite the higher costs, it’s doing fantastic,” says Charney. “This is not the America that Donald Trump has in mind. This is the America that the Rainbow Coalition had in mind.”

Evolution of Retail, the Gender Gap