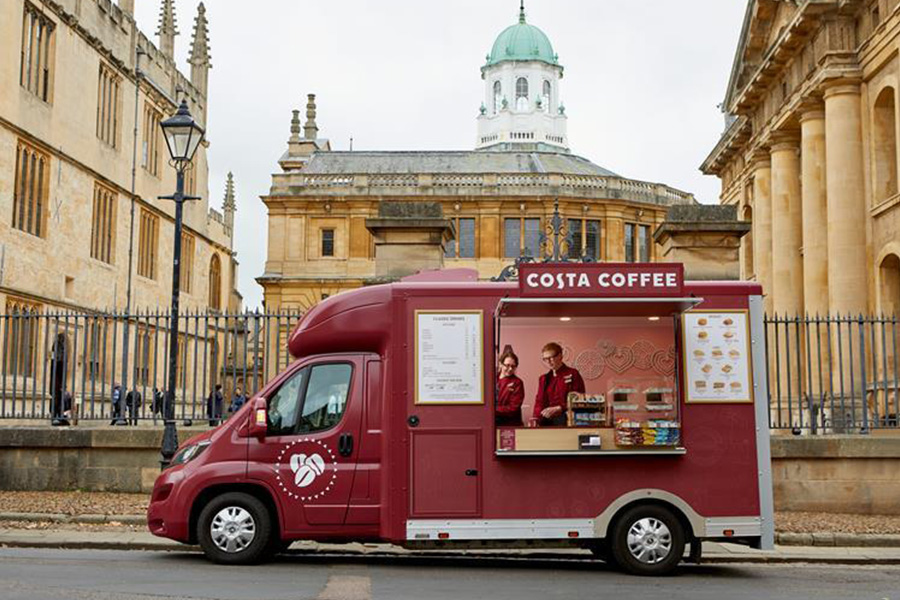 The six-metre-long vehicle opened last week in Oxford. It forms part of a trial that will see two more launch over the next six weeks that will explore different opportunities.

The first in Oxford is to test the “coffee van legacy” in areas such as business and retail parks, and outside colleges or offices at lunchtimes.

The next one, which will be launched with a franchise partner, will be located in rural and seasonal locations. The third van will be trialled at events for private hire as well as with corportate partners located on ferries, cruise ships, train stations and theme parks. It will also support trials with the former two.

“We want to really get into the detail of how these three trade and perform and once we’ve proven that, we want to go out to our high-performing franchise partners and work with them to scale this across the UK and Ireland,” Costa Coffee head of propositions Jamie Awdry told The Grocer.

The vans will feature the same equipment, processors, grinders and machinery as an ordinary Costa Coffee store and offer a range of food including cakes, biscuits and toasties.

They will carry Costa Coffee seasonal campaigns as well, meaning customers can enjoy its Toffee Penny Latte during the winter or its Mango & Passionfruit Cooler in the summer, for example.

“One of the challenges you see with independent coffee shops is when it’s the summer they don’t perform as well, so we’re trying to counterbalance that,” he said.

There will be two members of staff serving behind the counters, and the van will relocate around the area on a roughly one-hour basis.

Awdry explained the business has had to apply for a peripatetic licence to allow for roaming street trading. “It’s one of the things we’ve been working really closely with local councils and authorities on,” he said. “Different councils across the country have different requirements.

“In one of the locations we’re currently looking at, we get a licence for the whole area and they tell us the parts we can’t go within it. So as an example, they’ve got a park within their area that has a council-run café located there. So we can’t go and compete against that.”

Awdry said the main challenge the business could have in terms of a wider rollout is the availability of vehicles, which has been impacted by the global chip shortage. Semiconductor chips are used to power a variety of vehicle features, including power steering, brake sensors and parking cameras.

“The global chip shortage means it’s harder to get vans than it was in the past,” he said. “None of it is too complicated, it’s just time that we’d need and then we can do it steadily.

“We want to test and learn from all of these things. But obviously, we’ve got bold ambitions.”

Bed Bath & Beyond and Kroger team up on e-commerce, in-store pilot