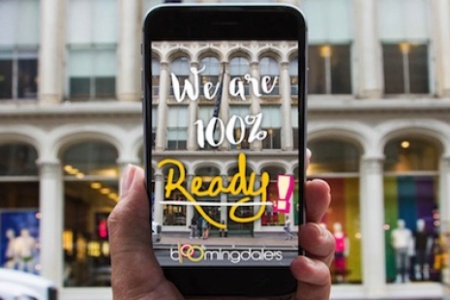 Bloomingdale’s is bridging the gap between digital and bricks-and-mortar with an in-store scavenger hunt that leans on Snapchat and geofilters.

The department store chain is implementing a fun call-to-action sweepstakes campaign with Snapchat users to celebrate the fall launch of its 100 percent campaign. Through a partnership with artist Greg Lamarche, Bloomingdale’s is bringing graffiti-style flair to its window displays while also inviting users to explore its stores to find hidden filters.

“Hiding hundreds of Snapchat filters at local stores around the country felt like a fresh take on a scavenger hunt or sweepstakes,” said Jonathan Paul, operating vice president of social media at Bloomingdale’s. “One of our insights came from Pokemon Go and that mobile user behavior.

“We thought that if we could gamify Snapchat geoflters we could connect with shoppers in a playful and creative way,” he said. “We cannot wait to receive snaps from shoppers entering our Swipestakes.

“It is intentionally a very collaborative and creative campaign concept — designed to capture the spirit of 100 percent Bloomingdale’s, our fall merchandise program that’s built on collaborations between Bloomingdale’s and over 100 top designers.”

100 percent Bloomingdale’s
100 Percent is Bloomingdale’s continued campaign that is upping the exclusive factor for the department store, with products that are only available at its chain. The latest fall campaign is partnering with graffiti-style artist Mr. Lamarche for a series of window displays that incorporate his art pieces with its fall collection.

Snapchat users are being invited to their local Bloomingdale’s to explore the department store to uncover hidden geofilters over the upcoming holiday weekend. Each filter adopts Mr. Lamarche’s iconic font style to weave a consistent campaign theme.

The artist’s work will be arranged in a window display at Bloomingdale’s flagship store in New York City on 59th street and can be seen on Lexington and Third Avenues.

Participants are prompted to go to their nearby Bloomingdale’s with their mobile devices to take pictures and video in Snapchat. Users walk around the store and swipe to discover the geofilters located at specific areas.

Entrants have the chance to win a wide range of prizes such as concert tickets to Maddie & Tae, a meet and greet with Rebecca Minkoff during her upcoming fashion show, gift cards to Bloomingdale’s and fall products. The contest will run from September 3 to September 5.

As part of a previous 100 Percent campaign, the retailer partnered with Museum Hack to create #BloomiesHack scavenger hunt shopping experiences at its flagship store on 59th Street in New York (see more).

Designing experiences
Pop up shops and Bloomingdale’s Web site will also be selling limited edition products made in collaboration with Mr. Lamarche that boast his graffiti and font style. Merchandise including mugs, decorative pillows, toiletry bags, men’s apparel and accessories will be available for purchase until October 31.

Customers purchasing the limited edition collection may receive a free Greg Lamarche letter pin while still in stock. On September 17 women can go to Bloomingdale’s locations to receive a free patch with a purchase of jeans.

Mr. Lamarche has also designed the patches in his style. From 1pm to 6pm shoppers can have their patches sewn on in stores.

The collaboration builds on 100 Percent Bloomingdale’s partnership with a wide range of designers.

“The omni-channel aspect of this campaign is precisely what makes it so strategically compelling. It is activating social, local and mobile media to drive prospects to our brick-and-mortar stores,” Mr. Paul said. “The collaboration with designers has been terrific not only from a product development point of view but in marketing, too.

“We have had amazing support from our vendors, and the prizes for our Swipestakes – Rebecca Minkoff fashion show tickets, a bicycle from Wildfox, Maddie & Tae concert tickets – tons of our 100 percent exclusives like a tracksuit from Juicy Couture, really speaks to that partnership.”