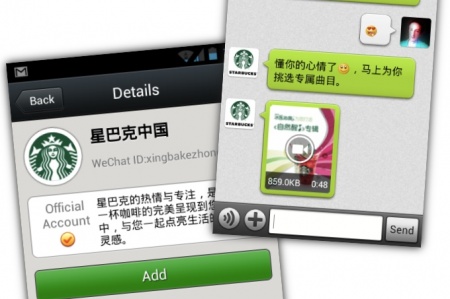 Chinese technology giant Tencent and global coffee chain Starbucks have created a new social gifting feature on Tencent’s popular messaging app WeChat for early next year, through which WeChat users will be able to buy and send Starbucks-branded drinks and gifts.

In a joint statement, the companies said Starbucks will become the first retail brand to combine and bring a locally relevant social gifting and digital payment experience to WeChat in China.

The new gifting platform with Tencent is part of Starbucks’ “growing digital presence focused on connecting with customers through digital channels, including the Starbucks Mobile App, the My Starbucks Rewards program, and social media,” according to the statement.

Starbucks also announced on Thursday that customers will now be able to use WeChat Pay — a digital wallet embedded in WeChat’s account — to make payments across nearly 2,500 Starbucks stores in China.

Starbucks’ own mobile app is the most successful mobile payment method in the US, with transactions reaching 7 million each week in the country, accounting for 16 percent of total mobile transactions there, according to a Sohu report on Thursday.

The successful story in the US had stymied a move to accept third-party payments in China as Starbucks feared it would bring down utilization of its own app, according to the report. In China, a greater amount of consumers prefer ordering food from McDonald’s and KFC via their WeChat platform rather than the two brands’ official mobile apps.