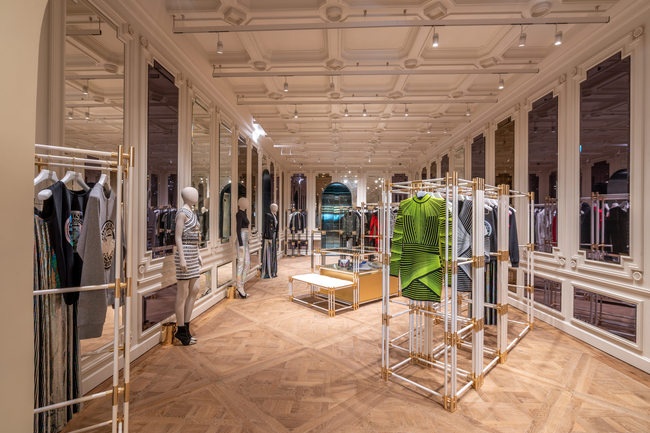 French luxury fashion house Balmain has opened a new flagship in Miami’s Bal Harbour Shops, with another in Las Vegas’ Wynn Plaza set to launch in October, openings which mark the brand’s first boutiques in both cities.

The interiors of both flagships were designed by Balmain creative director Olivier Rousteing and architects from Paris’s Studio AMV Anna Philippou, Marie-Charlotte Prosperi-Fouchard and Victoire Guerlay. Each boutique was designed to emulate classic Parisian architecture through a hôtel particuliermodel, aiming to offer what the brand has described as “experience, intimacy and discovery” through “a series of connected, distinct rooms.”

“Since this design will serve as a prototype for all future addresses, Olivier wanted the stress to be placed squarely on the second part of the house’s official name: Balmain Paris,” Philippou said in a press release. “He made it clear to us that he wanted Balmain to transport Paris to all corners of the globe, to make each Balmain visitor feel the atmosphere of Paris, wherever they may be in the world.”

“Our decision to open in Las Vegas was guided […] by the unique opportunity presented to us by the opening of the Wynn Plaza,” said Massimo Piombini, Balmain CEO. “The chance to be among the compelling mix of brands at this new location made us decide on having Las Vegas be one of our first American retail addresses.”

Piombini also explained the thinking behind the Bal Harbour location, saying it was chosen because of “Miami’s uniquely vibrant fashion and retail environment.”