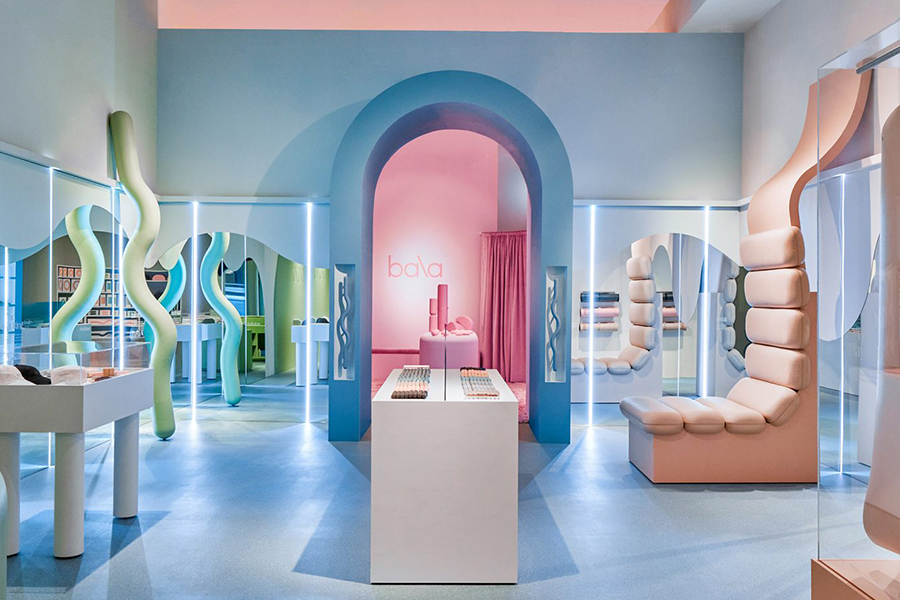 Brooklyn-based Ringo Studio has created a pastel “playground” as the first retail space for fitness brand Bala in New York City, which includes scaled-up versions of its products.

Founded by Natalie Holloway and Max Kislevitz, who appeared on reality TV show Shark Tank, Bala sells weights, bands and other fitness equipment in a range of candy colours.

Ringo Studio founder Madelynn Ringo, the former retail designer for cosmetics brand Glossier, cold-called the duo and asked them to keep her in mind when they opened their first physical retail space.

So when the opportunity arose to take over a 1,300-square-foot (120-square-metre) space at 99 Spring Street in SoHo, Ringo was brought on to translate the brand’s aesthetic into interior design.

The products are typified by soft, rounded shapes, so these were replicated in features around the store.

“The space invites visitors to work out amid scaled-up versions of Bala’s visually compelling products,” Ringo said. “These sculptural elements create nooks for testing, touching, and trying out in-person.”

The entrance to the store is under a black arch that resembles one of the brand’s signature products: The Power Ring.

Beyond, a pale green counter displays a variety of weights in the same hue as its curved top. Further areas are also colour-matched with the items on show.

“Organised chromatically, distinct zones immerse visitors in the colour space of the band, heightening the sense of place and identification with the brand,” Ringo said.

A giant 12-foot-tall version of the Bala Beam is propped up against a mirrored wall that is divided by vertical light strips.

On the opposite side, an oversized replica of a Bangle – used as ankle weight – swoops down from the ceiling to form a squishy leather seat.

Through a pale blue arch is another space decorated entirely in pink, from the walls, ceiling and counter, to velvet fitting-room curtains and a furry carpet.

The space was fabricated by New York-based Konduit, which specialises in scenic design, curved surfaces and custom finishes.

The team worked with Ringo Studio to match the distinct matte sheen and exact colours of the Bala products across the scaled-up design elements.

Outside of retail hours, the store is also intended to host fitness programs that incorporate the various products.

“It’s a Balacise playground to introduce customers to their innovative products and encourage them to test and experiment,” Ringo said.

Pastels have been a popular choice of palette for stores and boutiques over the past few years, particularly in New York City.

Brands like Everlane, The Arrivals, and of course, Glossier, all chose similarly soft shades for their shop interiors in the city.

Between Shopping and Entertainment: Welcome to the World of Social Shopping