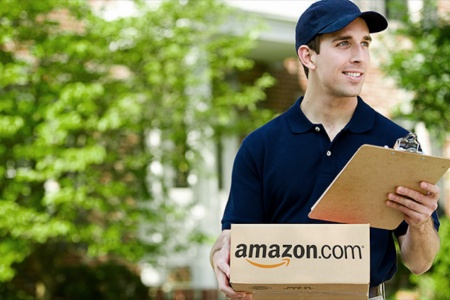 Amazon.com Inc. is now delivering packages right to the car.

The new delivery option is part of the Amazon Key program, launched last year, in which the company’s delivery drivers drop off packages inside homes. That system, which includes a so-called smart lock for the door and a security camera, currently costs about $220.

The car service is free for Amazon Prime members who own certain newer GM and Volvo models. Customers download the Amazon Key app and link an Amazon account with a connected car service, such as OnStar. A delivery driver unlocks the car—either the trunk or doors, depending on the vehicle—remotely through the wireless connection.

Customers are instructed to park in a “publicly accessible area,” such as a driveway, street or a surface-level lot within the delivery range. The day of the delivery, customers receive a four-hour delivery time window, as well as notifications when the car is unlocked and locked.

Amazon said it ensures an authorized driver is at the right location with the correct package before the vehicle is unlocked remotely. The delivery driver is required to lock the door before moving on, and as a fail-safe measure the doors will lock automatically after a certain period, Amazon said.

The entire Amazon Key program relies on customers allowing strangers to access their most personal spaces. But unlike with the home, where security cameras can record a delivery person’s entry and exit, there are no easy ways to view a delivery person’s interaction with vehicles and whatever items people store inside them. The program is also another way Amazon is trying to integrate itself into customers’ lives—particularly the more than 100 million people paying for its Prime service—and to control every step in the retail process.

Amazon has tens of millions of devices inside people’s homes, from voice-enabled Echo speakers to Dash tap-to-buy buttons, that make it easier for shoppers to choose Amazon over competitors.

Amazon Key would give the company control over the final step of dropping off packages.

The Key In-Car service reflects Amazon’s larger logistics ambitions, as the company handles more of its own shipments and expands to shuttle others’ packages. Amazon has also installed lockers in and outside stores and pickup hubs in apartment buildings to help lower costs associated with deliveries, which skyrocket when a courier misses a first delivery or a package is stolen.

The company previously was involved in an in-car delivery test with Deutsche Post AG’sDHL and Audi in Germany. Amazon has also formed a team that focuses on driverless technology, including associated potential delivery options.

Still, it is unclear whether there will be widespread demand for in-car package delivery. While car companies are equipping vehicles with a growing amount of technology, many owners tend to use only the basics, and commonly report frustration with even simple features such as Bluetooth connections.

Amazon said it plans to expand the offering to more vehicle makes and models over time.

GM and Volvo gain the ability to offer a no-cost perk to current owners, while providing a potentially differentiating feature for new-car shoppers. Owners must be Amazon Prime members and have an active OnStar or Volvo On Call

Subway to close about 500 U.S. restaurants