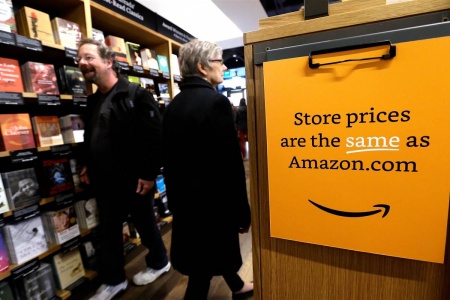 There’s no such storefront for the ecommerce giant in Europe, so Lutkin,
an Amazon.com customer, decided to check out the mall-based location
that opened on Thursday.

Lutkin, who is moving to Munich in a couple of months, said that if
Amazon opened a store in the Bavarian capital, she would “regularly”
patronize it.

Given a full slate of touristy NYC activities ahead, Lutkin wasn’t
planning to buy any physical books at the store, instead saving the ones
that caught her attention—many of which were about cooking, she said—on
her wish list via the Amazon app. She’ll eventually buy many of them,
she said—on Amazon.com, underscoring the showrooming effect the
Seattle-based retailer hopes to achieve in order to drive even more
online sales. (Slice Intelligence reported that Amazon accounted for 53
percent of all online sales growth in the U.S. last year.)

The German’s multichannel-oriented take on the store should be music to the ears of Amazon chief Jeff Bezos, who is set to launch another New York store on 34th Street this summer. Amazon will then have eight physical stores in the U.S., with plans to open five more around the country before the end of 2017.

The baker’s dozen, when all told, will resemble what people have seen in New York today as well as the store’s forerunners in Seattle; Portland, Ore.; San Diego; Dedham, Mass.; Lynnfield, Mass.; and Chicago in recent months. (The first location debuted in San Diego in March 2016.)

They look like bookstores—there are no digital screens and few
techie bells and whistles. Instead, rows of shelves in a
4,000-square-foot space dominate. But there are a few key differences
compared with a, say, Barnes & Noble.

Pricing tech: There are no prices on the books. To see the price, one has to either take a picture of the book cover with the Amazon app or walk a short distance to a self-serve price scanner. Then, they will see the Prime membership price and the regular Amazon price. What’s the point? There’s probably multiple ideas there, but chiefly Amazon is collecting purchase-intent data when someone scans the book but doesn’t buy it. That information can then be used to target the customer on the retailer’s digital channels.

Mobile pay: Patrons can scan a code on the book to buy it through Amazon’s app. But it’s not like the web player’s grocery pilot, which allows people to walk in and out with purchased goods without interacting with an employer. At an Amazon books outlet, patrons have to show a store associate the transaction on their phones before leaving the premises with a mystery, biography or work of science fiction.

Popular stuff: All of the 3,000 titles in the store have at least four-star ratings on Amazon.com and include online customer reviews. The books in the store collectively have received 1.7 million five-star reviews.

“Facebooks:” The cover of every book on the shelves faces outward just as titles appear on Amazon.com. There are no spines to read vertically.

But the sales still happened, suggesting that Amazon’s stores have perhaps greater online impact than one might initially believe.

At the same time, Fred Leong, a self-described printed-content aficionado from New York who was taking in the new store, didn’t foresee the new locations affecting how he spends his book budget. The Amazon brand won’t necessarily pull him from his established literary retail haunts.