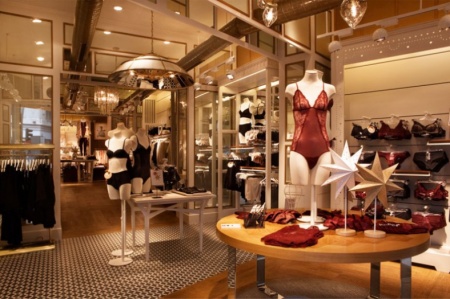 Amazon, which has been quite assertive in its apparel push, has become the largest online seller of apparel: Its $16.3 billion apparel sales in 2015 exceeded those of the next five competitors — Macy’s, Nordstrom, Gap, Kohl’s and Victoria’s Secret parent L Brands — combined. Factoring in Amazon’s seven-brand private-label rollout earlier this year, it’s no wonder Cowen & Co. analysts expect the e-commerce company will dethrone Macy’s as the largest U.S. clothing retailer some time this year.

The lingerie market is particularly fraught these days, shaken by e-commerce upstarts like ThirdLove, which are focused on price and fit. The athleisure trend has also pressured Victoria’s Secret to introduce more athletic styles and brands. American Eagle’s lingerie brand, Aerie, has also attracted younger shoppers with a marketing campaign that eschews photoshopping its models. That success may have been a factor in Victoria’s Secret decision last year to drop its famous airbrush-heavy, supermodel-populated print catalog.

While authenticity and fit have emerged as particular consumer concerns at the moment, consumers have long preferred to shop for lingerie in stores, where they can try on and be fitted for garments in person. But e-commerce company ThirdLove has developed a work around — an app and a broad range of sizes that the company says go far in solving bra shoppers vexing fit challenges.

Without such sophisticated shopping aids or the advantages of brick-and-mortar stores, Amazon will be left to compete on price: Its $10 bras fall far below the cost of Victoria’s Secret’s $40 bras. Amazon already sells several well known lingerie brands, where its customers likely find items they’ve tested out in stores or have already had in their dresser drawers.