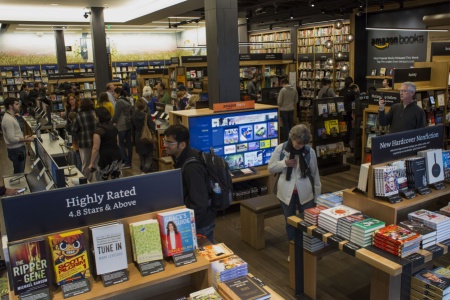 On Wednesday, Amazon announced it is hiring employees to staff its 10th bookstore in Bellevue, Washington. The new location will join current and planned stores across the United States, including those in Chicago, New York, and Boston.

This gung-ho pattern of bookstore building suggests the company is pleased from sales it has seen at the four locations it has opened so far. Then again, Amazon has long been willing to eschew profit in favor of obtaining data and market share. So it’s also possible the company is using the stores as part of some larger experiment.

Recall how last year the company made waves with the announcement of Amazon Go, a new sort of grocery store that let consumers shop with an app and without checkout counters.

Meanwhile, book lovers are likely to be pleased that someone—even if it’s Amazon—is opening brick-and-mortar bookstores again. In recent years, many communities no longer have a nearby place to buy book. Indeed, at the end of 2016, my neighborhood in Brooklyn lost two bookstores in as many months.

The new Amazon bookstores offers a selection of books, of course, but also a variety of technology and kitchen gadgets. The stores also serve to promote Amazon Prime membership because those who subscribe to the popular annual service pay a lower price at the stores.