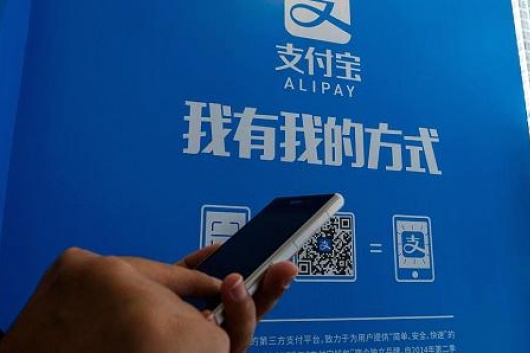 The app will recognize where the Chinese Alipay user is in Europe and send notifications about where to eat, shopping offers and places to see. There are also user reviews on the app. When a user attempts to pay, a barcode will be shown on a person’s device which the merchant can scan.

Alipay is one of China’s biggest payment services and competes with Tencent’s WeChat Payment. Alipay is deeply ingrained in the lives of Chinese consumers and is used to pay for items in-store and online for goods and services ranging from taxis to restaurants and clothing.

Alibaba is hoping that its active Alipay users, which now total 450 million, according to the company, will continue to use the app abroad allowing the company to take advantage of the increasing number of Chinese tourists who are spending more.

“The vision is targeting two billion people within next five to ten years, not only in China but other countries too,” Sabrina Peng, president of Alipay International, told CNBC at the Money 2020 fintech conference in Copenhagen on Tuesday.

Chinese tourists spent $215 billion abroad last year, a 53 percent rise from 2014, according to the World Travel & Tourism Council. Alipay is hoping that much of this spending will be through its app.

Alipay has been expanding out of China in recent times. Alibaba and Ant Financial upped their stake in Indian payments firm Paytm last year as it looks to expand into India. Peng revealed to CNBC that the company is “actively looking” for more partners in Asia as it looks to go deeper into the region.

But the firm does not plan to invest heavily in payment firms in Europe just yet. Ant Financial is talking to a number of partners from financial institutions to restaurants and theatres across Europe to get them on board with Alipay. Merchants will be able to view the shopping habits on Chinese consumers spending in their stores through Alipay’s dashboard.

Partnerships will be key for the platform in order to get merchants sending through offers and deals. Alipay does not compete directly with the likes of Samsung Pay and Apple Pay as both services just allow people to purchase items with their phone. Instead, with the focus on allowing merchants to use Alipay to help market to customers and learn their behavior, Ant Financial sees it as a tool to drive revenues.

“For merchants it’s the same story, they want to know Chinese consumers, Asian consumers, Japanese, South Korean, Indians, but it’s hard for them to know their overseas customer because they lack a platform. That’s what we are doing: connecting consumers and merchants together to help them connect better.”

Peng did admit that finding local partners was “a bit challenging” given the scale of customers the company needs to get on board.

Chinese consumers will be able to use Alipay in the U.K., Germany, France and Italy to begin with starting in the summer.

Is H&M moving fast enough to become a digital brand?

How Armarium Is Making the Case for Luxury Fashion on Loan