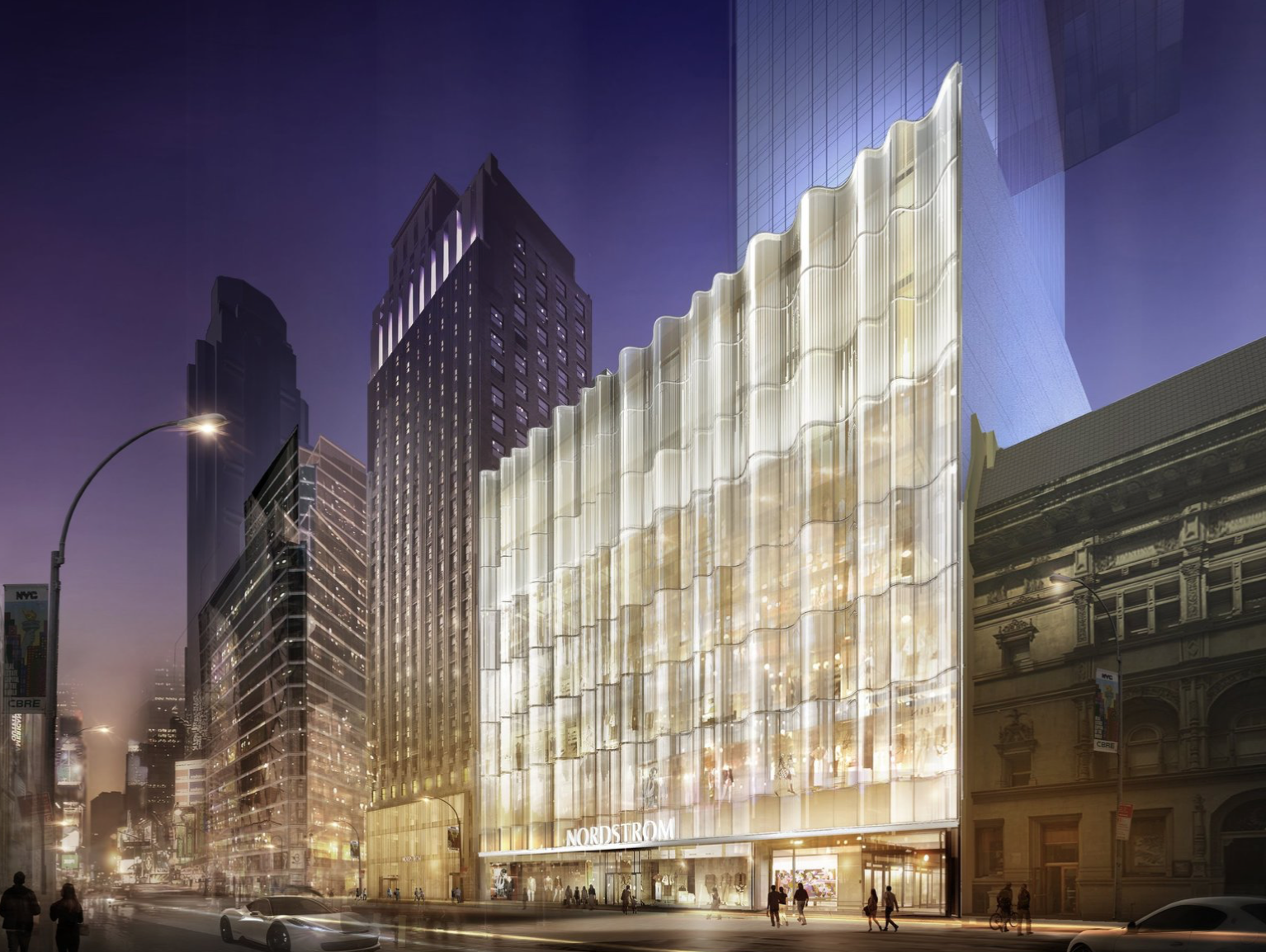 In just over two months, Nordstrom executives and other luminaries will descend on midtown Manhattan to christen one of the largest, most ambitious projects in the company’s 118-year history — a seven-story women’s store on West 57th Street, in the heart of one of America’s most important markets for high-end shopping.

Years in the making, the new store comes with a large price tag — more than $500 million, according to some reports — but even larger expectations. Both inside and outside the company, the Manhattan flagship is seen as the crowning piece in a seven-year campaign to remake one of the oldest names in high-end retail.

But with Nordstrom’s recent struggles, those expectations will be even greater. The Seattle-base retailer has been hit hard by falling sales and disappointing earnings — and some analysts expect more downbeat news when the company issues its second-quarter financial results on August 21.

Since November, the company’s share price has fallen by more than half, to $25.32 on Friday. That’s its lowest in 10 years — a decade during which the S&P index for the retail sector has more than doubled.

Management tensions have risen. Reports last month suggested that some board members want to replace the Nordstrom brothers, Erik and Pete, who have led the retailer since the death of their elder brother Blake in January, even as the Nordstrom family has revived efforts to regain a majority share of the company.

Meanwhile, the closure of underperforming stores — most recently, at Seattle’s own Northgate Mall — though cheered by analysts as necessary strategically, has added to an outward image of a once-great retail empire in retreat.

Against such a tumultuous backdrop, the NYC flagship opening has taken on outsized significance. A successful debut will be counted as welcome evidence that Nordstrom has not only stanched the bleeding, but has finally cracked the code for high-end retailing in a digital era; a lackluster opening will add to doubts about the retailer’s turnaround strategy.

“A lot rests on their flagship store,” said Camilla Yanushevsky, a retail analyst at CFRA Research.

Nordstrom officials declined to be interviewed for this story, but the company responded to some queries via email.

Some of what ails Nordstrom is relatively simple. The retailer has acknowledged a series of “executional misses” this year, among them, a botched upgrade of its customer loyalty program and mistakes in stores’ merchandising mix. Industry analysts say such errors are readily correctable — and Nordstrom itself says fixes are already underway.

Other problems will take longer to set right, in part because solving them has required a complete rethink of much of the Nordstrom strategy.

Nordstrom became a national brand by perfectly melding impeccable customer service and quality merchandise for a middle-class consumer who aspired to dress like an upper-class one. But that model was upended — by online disrupters like Amazon, but also by a consumer who has been increasingly happy to trade the “experience” of the full-line department store for the discounts and convenience of online shopping.

Nordstrom was among the first of the major department stores to see this digital wave as a threat, but also an opportunity. The company launched Nordstrom.com in 1998, just three years after Amazon began selling online, and has labored ever since to adapt to the whims of these more fluid digital shoppers with everything from mobile shopping to online-only brands to social media influencers.

Most important, the company has invested heavily to embed its vast physical fleet — currently, 118 full-line stores and 248 off-price Rack stores — into a digital “ecosystem” that, if successful, will not merely survive in the online marketplace, but carve out a large, profitable piece of it.

Located in outlying neighborhoods, the Local stores serve as intermediaries between Nordstrom’s brick-and-mortar presence and its large online market: At Local stores, shoppers can pick up, try on and return items ordered online (and delivered the same day, thanks to a hyper-efficient supply chain), and get tailoring and other services in VIP “styling suites.”

By blending upscale service with the convenience of a neighborhood setting, the Local concept gives consumers “the best of both worlds,” says Oliver Chen, a retail analyst with Cowen Research.

This hybrid model is showing promise in keeping bricks-and-mortar relevant: One in three Los Angeles customers who buy online use a physical store to learn about the product they’re buying.

Yet even as Nordstrom prepares to crown this best-of-both-worlds strategy with its Manhattan flagship, there is no shortage of questions about the new model’s broader direction.

For example, Nordstrom is betting heavily on female shoppers with upscale tastes, with an emphasis on glossy women’s stores and “high-low” assortments that might run from a $100 pair of Nikes to a $2,500 Gucci handbag.

But some analysts worry that the today’s apparel market is actually moving in the opposite direction.

Some of retail’s strongest recent growth has come in men’s apparel, says Yanushevsky, the CFRA analyst. Nordstrom itself has acknowledged that women’s apparel has “continued to have the toughest results” in its full-price division.

Analysts also worry about the emphasis on higher-end purchases. So far in 2019, Nordstrom’s hoped-for “price point assortment” of $50 to $200 is “not resonating with customers,” notes Matthew R. Boss, a retail analyst with J.P. Morgan.

One problem is that Nordstrom’s traditional market has splintered, says Neil Saunders, an analyst with GlobalData. Many midmarket customers have gravitated toward discounters: That’s one reason why Nordstrom’s Rack is now generating a third of the company’s total sales, and why off-price competitors like Ross and TJ Maxx are booming.

Meanwhile, customers looking for Gucci and other higher-margin “strategic” brands are just as likely to buy directly from the brands themselves, Saunders adds.

While there is still a Nordstrom customer who wants “super-premium” products, Saunders says, there simply may not be enough of these shoppers to fill Nordstrom’s large physical stores. “You can’t operate a massive department store off really super premium” purchases, Saunders says. “It’s very niche.”

Such concerns go to the heart of the Nordstrom’s flagship model: Can these stores generate enough revenue to justify their large costs?

That question seems especially relevant for the soon-to-be-open women’s store in ultra-pricey Manhattan. (A men’s store opened, across 57th street, in 2018.) Although Nordstrom officials have touted the store as “a growth driver,” says Yanushevsky, “we question the return on investment given the current softness in women’s apparel.”

Nordstrom contends that such landmark stores in locations like New York, Los Angeles and even Seattle deliver returns that go well beyond in-store sales, because these cities act as “destinations” for out-of-area shoppers and tourists.

And New York City is unquestionably a shopper’s paradise: Even without a flagship, it is already Nordstrom’s biggest online market. Adding a flagship store and two Local stores — in the West Village and the Upper Eastside — will give the retailer “tons of exposure to a vast shopper base,” says Thomas Dobrowski, an expert on retail real estate with Newmark Knight Frank.

Yet even the Big Apple is no guarantee of retail success, in part because stores must generate huge sales simply to cover the high real estate costs. As Yanushevsky notes, recent retail departures from New York City have included a number of high-end players, among them, Lord & Taylor, Calvin Klein, Ralph Lauren and Henri Bendel.

Some analysts wonder whether Nordstrom, which reportedly committed to the Manhattan flagship back in 2012, would have made the same decision today, given how the risks to traditional retail have ballooned in the last seven years.

“It’s hard to rewind some things,” says Kathy Gersch, a former Nordstrom vice-president who left in 2002 and now advises firms on organizational change for Kotter. “I wouldn’t say it’s destined to be a failure, but they’ve got to be smart about how they merchandise the store.”

Just how smart Nordstrom is in Manhattan may not be clear for several years, and the same is likely true for its broader digital strategy. Nordstrom’s own projections suggest gradual improvement in sales, profits and cash flow through 2022.

The real question is whether investors will wait that long. In 2018, Nordstrom said it was expecting “to reach a pivotal year in achieving long-term profitable growth.” After years of heavy investment, the company saw itself as well-positioned to reap the benefits. But so far, those rewards have been slow to materialize. Instead, when Nordstrom reported first-quarter results, in May, net earnings were down 57 percent year-over-year, and the company had to downgrade its own growth forecast for 2019.

If Nordstrom sees a few more bad quarters — and with a looming trade war and a potential recession, that’s not out of the question — there will surely be more calls by board members to bring in new management.

On the other hand, with Nordstrom’s new model coming online and no more major investments to make, the retailer is, in theory, in a solid position to improve. If it can deliver a smash hit in Manhattan, followed by a few quarters of steadily improving results, Nordstrom could silence its critics.

If so, it will be a testament not only to Nordstrom’s successful embrace of the digital world, but also, perversely, its refusal to abandon the traditional retail model it has epitomized for so many years.

Even as the Nordstrom family has been willing to make heavy investments in a digital platform, Saunders says, it never stopped investing in its physical stores and staff, and thus has protected its brand.

Where other department stores often look tattered today, Saunders says, “if you walk around Nordstrom stores, even in locations where it may not have a future, they always look nice. They look neat, they look tidy, the fixtures and fittings are well maintained, the service is still very good, the staff very engaged.”

The result, Saunders adds, is “a really strong base from which to build back.”