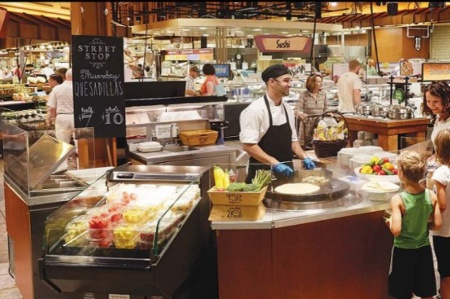 Ahold USA, Delhaize America, Wal-Mart Stores Inc., Wegmans Food Markets
and Weis Markets have been named to the inaugural class of the U.S. Food
Loss and Waste 2030 Champions, which was established by the U.S.
Department of Agriculture and the Environmental Protection Agency to
recognize U.S. businesses and organizations that have commited to
concrete steps to reduce food loss and waste in their operations 50
percent by 2030.

Each 2030 Champion establishes a baseline marking where they are today, and will measure and report on their progress toward the goal in ways that make sense for their respective organizations.

In the United States, EPA estimates that more food reaches landfills and incinerators than any other single material in everyday trash, about 21 percent of the waste stream, while USDA’s Economic Research Service estimates that the amount of food that went uneaten at the retail and consumer levels in the baseline year of 2010 represented 31 percent of the available food supply, about 133 billion pounds of food worth an estimated $161.6 billion.

According to the government agencies, success in reducing food waste will require action from the entire food system, including the food industry, nonprofits, governments and individuals.

Details on becoming a U.S. Food Loss and Waste 2030 Champion can be found here. Businesses not yet in a position to make the 50 percent reduction commitment can participate in the Food Recovery Challenge or the U.S. Food Waste Challenge.

EBay is taking on Amazon Prime and Wal-Mart in guaranteed delivery, free shipping