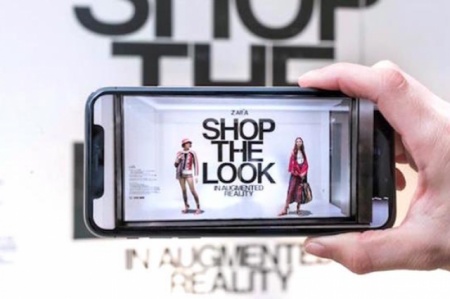 Inditex SA is benefiting from investments in technology that are boosting efficiency online and in stores, helping the Zara owner contend with Amazon.com Inc.’s foray into the fashion aisle.

Earnings in the three months through April of 851 million euros ($999 million) beat analysts’ estimates, and the gross margin widened after reaching the lowest in a decade last year. Sales however missed expectations, according to the statement Tuesday.

Inditex has rolled out a wave of new technology at select Zara stores around the globe in recent months, including augmented reality and hologram displays of clothes, as it moves to erase the lines between online and in-store operations. A new concept store in the U.K. uses robot arms to deliver internet orders to walk-in customers. Swedish rival Hennes & Mauritz AB has been struggling to revive sales growth as fashion mistakes and increasing competition have lifted inventory levels to a record of more than $4 billion.

Inditex shares fell 1.9 percent as of 9:57 a.m. in Madrid after the company reiterated its forecast for a stable gross margin this year, despite an improvement to 58.9 percent from 58.2 percent in the fiscal first quarter. The company said its definition for stable is plus or minus 0.5 percentage point.

Zara started online sales in Australia and New Zealand during the first quarter. Inditex plans to start operating a new 90,000-square-meter distribution center near its headquarters in Arteixo this summer, and the company is working on a new logistics hub in the Netherlands. Those investments will exceed 150 million euros, the company said.

With Zara’s augmented-reality app, a shopper can view moving images of models displaying the latest collection when pointing smartphones at Inditex’s shop windows.

Inditex said it plans to replace a departing board member with Pilar Lopez Alvarez, the head of Microsoft Corp. for Spain. Earlier this year, the retailer hired Sergio Alvarez, a founder of CartoDB, one of Spain’s largest tech startups, to bolster its digital operations.

Inditex, which also operates the Pull & Bear and Oysho brands, reported a 41 percent increase in online sales last year. The company’s strategy of relying on low inventories and quick turnover makes it more similar to many e-commerce companies than to most traditional retailers.

Amancio Ortega, the 82-year-old founder of Inditex, has been dropping in the Bloomberg ranking of the world’s richest people. Having been neck-and-neck with Bill Gates and Warren Buffett last year, now he’s No. 6, surpassed by newcomers such as Jeff Bezos and Mark Zuckerberg.