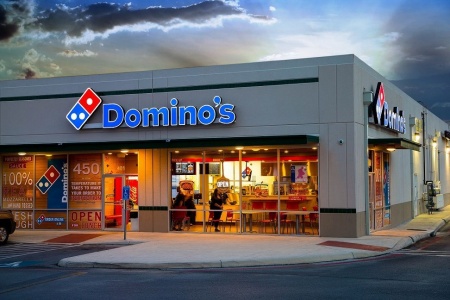 Pizza is widely regarded as the video game fanatic’s cuisine of choice. And for members of Domino’s loyalty program, mobile gaming skills will now be one of the keys to unlocking free pizza.

Domino’s is launching a mobile game called “Piece of the Pie Pursuit,” according to a press release. Customers who are able to beat all six pizza-themed levels of the game will be granted 10 loyalty points. Members can redeem 60 points for a free medium two-topping pizza. The game play, as seen in a YouTube video, consists of navigating Domino’s-branded tokens, marbles and other objects through a complex, three-dimensional Rube Goldberg-type machine.

The game ties directly into the chain’s latest advertising, which promotes the loyalty program and the ease with which members can earn points and free pizza. The commercial, titled “Beautifully Easy,” depicts a woman ordering a pizza while a narrator details different ways to order and earn points. On-screen, a Domino’s employee prepares a pizza as a machine, similar to one in the game, runs through a series of chain reactions.

This isn’t the first high-tech step Domino’s has taken to extend the excitement of ordering pizza. In the U.S., Domino’s was an early foodservice innovator, introducing its popular Pizza Tracker back in 2008. In 2015, the company added order-streamlining functionality which allows users to simply text a pizza emoji to the chain to automatically place an order.

And in Australia in 2014, Domino’s launched its Pizza Mogul app, by which users can design custom pizzas and get paid when other customers purchase their creations.

While the new Domino’s mobile game doesn’t seem to be targeted strictly at hardcore gamers, big names in pizza have been exploring the pizza/video game connection with success in recent years. In 2013, Pizza Hut began allowing gamers to order pizza via Xbox, resulting in $1 million dollars in sales within four months. Domino’s rolled out a similar Xbox app the following year.