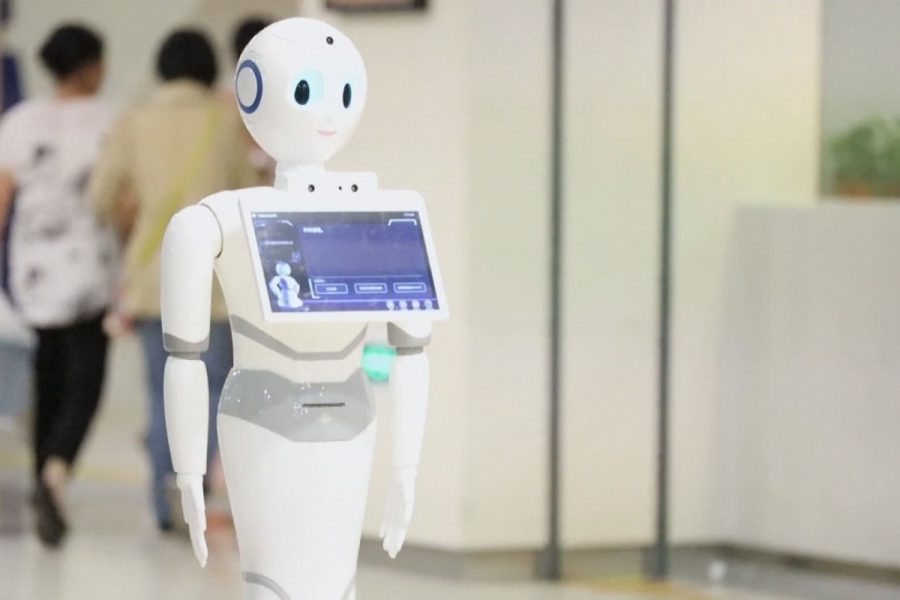 Step inside a Giant Food Stores location in the eastern U.S., and chances are you’ll bump into Marty: a tall, grey, googly-eyed monstrosity on wheels that combs the aisles of the American grocery store chain looking for spills.

A decade ago, such a chore was probably carried out by a teenager or parent working part-time. But in 2019, where automation is big business and stores continue to cut costs, it’s the new norm.

Take the LoweBot: an autonomous retail services robot deployed as part of a pilot program in late 2016 that would whisk Lowe’s customers around a store, answer questions, and help them find products.

Then, the following year, the Mall of America in Minneapolis launched Pepper: a humanoid robot designed to help customers navigate the 5.6 million-square-foot expanse, offer gift suggestions, and even pose for pictures and dance with them.

And now Marty. Back in January, Giant Food Stores announced he will be working in 172 locations by summer’s end. The supermarket chain isn’t the only one experimenting with robot technologies in 2019. (The Wall Street Journal reported that at least 10 retailers are planning to test robots in their stores this year, primarily in the grocery, pharmacy, and home improvement spaces.)

But today’s retail tech is far from perfect: when Marty detects a hazard, such as a broken jar or spill, it sends an electronic message to an employee monitoring the store remotely in the low-wage Philippines who then alerts a store manager if it’s something that requires attention.

And, unlike a multi-faceted human store associate (which, it’s worth noting, doesn’t need an algorithm to engage and communicate with customers properly), the majority of robots can only complete limited tasks and aren’t able to provide the emotional connection (and stimulating in-store experiences that can result from it) shoppers now crave in the customer journey.

Which begs the question: why even have a robot in your store?

Retailers and brands are turning to robots to help differentiate themselves in an increasingly competitive marketplace and get the job done.

There are three essential reasons for this:

1) To save money in the long-term by employing robots, not people, to carry out low-skill, repetitive tasks.

2) To increase foot traffic due to the novelty of having a robot in your store (or, in the case of Pepper, mall).

3) To future-proof stores in the most comically misguided way possible. (It’s easy to imagine someone at a meeting on the future of retail innovation sheepishly offering up “Hey! What about robots?” when called upon to give their input, and the half-baked idea snowballing from there).

But robots and other lackluster new age retail technology — like augmented reality and virtual changerooms— don’t always enhance the in-store experience. Often, they detract from it. (A recent survey in Australia found 1% of consumers are interested in utilizing robots and chatbots while shopping and that the top feature attracting shoppers is actually the simplicity of a store’s layout.) Contrary to popular belief, consumers aren’t ready for these so-called “solutions”— sorry, Marty.

Retailers are obsessed with outsourcing low-level retail duties to robots. And why not? All industries go through periods of transition, and retail is ripe for disruption, what with its many inefficiencies when it comes to internal communications, brand consistency, and control at the store-level. Automation in all industries is inevitable, and retail is no exception; according to a previous report by the McKinsey Global Institute, 20% of retail salespeople’s current work activities could be automated by 2030.

That’s okay when it leads to increased productivity and allows employees to focus more on the customer. Case in point: Walmart recently announced plans to add almost 4,000 robots to its stores and facilities over the next few years in the form of autonomous floor cleaners, delivery truck unloaders, shelf scanners, and purchase pickup towers as part of a global shift to move human workers to customer-facing roles that focus their expertise on customer engagement over routine tasks. (The company has also pledged $2.7 billion over two years to increase worker wages as well as training and education as part of the effort.)

The problem occurs when robots and new age technology takes the place of a human connection between a brand or retailer and its customers.

Cleaning up spills (or, at the very least, alerting employees) is one thing. But when technology — like a virtual mirror for trying on makeup and clothing or a robotic steward that helps you find products — takes the place of a trained associate that understands the nuances and use cases of a product, retailers are missing the bigger picture.

Working in retail isn’t easy. The hours sometimes aren’t ideal, the turnover rate is high, and the pay is often underwhelming.

But in a world where almost everything is available at the click of a button and on your doorstep in under 24 hours, retailers need to realize that what sets them apart isn’t just the products and services, but their people.

Technology is no replacement for an authentic human/brand connection. Consumer tastes may change, but the human experience should always be at the heart of retail technology, whether it’s designed with customers in mind or the associates and store managers tasked with using it.

Consumers crave a human connection when shopping (according to a report by PwC, 75% of respondents said that, as technology becomes more pervasive in retail, they want a more social interaction as they shop, not less of one), and retailers who think robots are a good substitute are kidding themselves.

Investing in robots to carry out mundane tasks and connect with customers may make financial sense in the long term. But if you want to provide value to your customers, invest in training and technology that improves the in-store experience by helping employees memorably engage with customers. Because if you’re going to give customers an experience worth remembering, a robot with googly eyes looking for spills isn’t one of them.