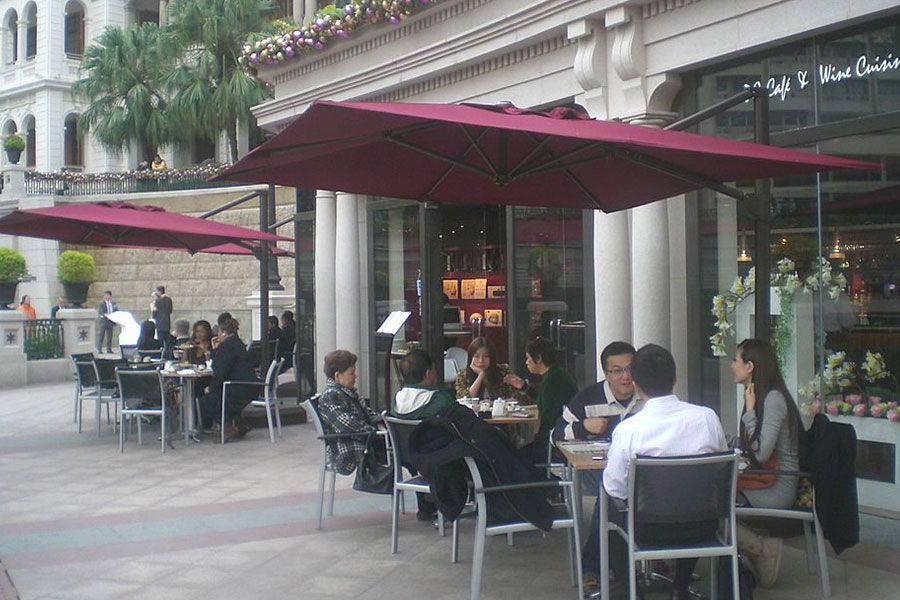 Over the next weeks, and maybe even months, the success of independent restaurants will depend on a factor that many may have never considered before — the size of the sidewalk outside.

To help restaurants get back on their feet, a host of US states have permitted restricted reopening, making use of outdoor space. Eateries in Louisiana and New York, among other states, may take over sidewalks and parking lots to introduce makeshift al fresco dining, with tables at six feet of remove from one another. Other states have placed limits on occupancy: in Alaska, restaurants can operate at 25% capacity, with tables at least 10 feet apart.

For some restaurants, it’s easy to take advantage of these new regulations. In Sunnyside, New York, a residential neighborhood three miles due east of Manhattan’s Grand Central Terminal, restaurants along its semi-pedestrianized mall are in a prime location to serve dumplings, kofta, or Peruvian chicken to socially distanced tables immediately outside their doors. Those luckier still have hidden backyards, where diners can be tucked away from the pollution and noise of Queen’s Boulevard. But not all are so fortunate. Restaurants on roads with narrower sidewalks, or without backyards, remain take-out and delivery only. Even those with a little more space to play with outside have chosen to opt out of bringing back service staff, due to the costs involved of returning to service with a limited number of tables.

Such limited reopening is a good start, but it won’t suffice to keep many eateries afloat, said Tony Maws, the chef of Craigie on Main, in Cambridge, Massachusetts. “This is simply not enough to save independent restaurants,” he wrote in the restaurant’s weekly newsletter. While any revenue was naturally better than none at all, he said, especially bolstered by takeout orders, restaurants would still be operating at a fraction of their usual volume: “This means we remain unprofitable and still cannot pay our bills.”

The proposition for even the best placed restaurants is extremely tough. Under normal circumstances, relatively tight margins are simply part of the business plan. But limited reopening places further constraints on potential earnings, while fixed costs, such as rent or utilities, remain at the same high price point. For customers, once again given the opportunity to eat out, the experience approaches the pre-pandemic normal. For those wrestling with the numbers, it’s anything but.

There are other complications. Moving outside may require purchasing expensive items at a time when most restaurants have little cash on hand. Meanwhile, customer confidence in the safety of eating out is also reduced: In a recent Nielsen survey of 1,600 people in New York, California, Illinois and Florida, less than a quarter said they would return to bars and restaurants as soon as they reopened.

Managing a restaurant is a tricky balancing act at the best of times, said longtime restaurateur Rick Camac, now the Dean of Restaurant and Hospitality Management at New York’s Institute of Culinary Education. Under normal circumstances, he said, if you’re a restaurant that pulls in $1 million a year, you want to spend about 10% on occupancy costs, namely your rent; 30% on “cost of goods sold,” which encompasses ingredients; 35% on labor; and 15% on other items like utility bills, paper goods, office expenses, and so on. You’re left with 10% in profit.

Even that 10% is optimistic: In a pre-pandemic analysis of net profit margins of privately held companies, US full-service restaurants averaged about 6% in profit. There are exceptions, of course — McDonald’s has occasionally had quarterly profits of more than 30% in recent years — but in general, getting rich off other people’s meals is far but guaranteed. “For restaurants that I get involved with in any way,” said Camac, “I usually try to put them in a position to come in somewhere between 8% and 12%. That’s a good return. Over that is a great return.” (Bars are somewhat better placed, with average profit margins of between 10% and 15% due to a combination of lower wastage and higher mark-ups.)

If your restaurant can suddenly only seat 50%, or even 25%, of its usual capacity, he said, it becomes very difficult to turn a profit. You can lower your ingredients cost a little by shortening the menu to reduce wastage. Labor might also go down a few percentage points: “You can save some money because you’re going to furlough some people and let others go, but your main people, such as your general manager and your chef probably have to stay. Those are the two most expensive labor costs.”

But rent, even while it usually makes up a smaller percentage, is the decider. “If you’re at $500,000 in sales instead of a million in sales,” he said, “your occupancy hits 20%. As soon as your occupancy hits 20%, you can lock the door and throw away the key. You’re done. You can’t make money.” Paycheck Protection Program loans have helped a little, though restaurant owners said the program is poorly designed for their needs, and doesn’t go far enough. They’re now calling for $120 billion in restaurant-specific government support, to help save struggling eateries and millions of at-risk jobs.

Instead of deferring rent, Camac has encouraged restaurant clients to call their landlords and negotiate a sliding-scale rent, where they pay 10% of whatever the restaurant brings in. It probably won’t be as much as previously, he said, “but it’s better than nothing—it’s going to keep you tenant in there, you’re going to have some cash flow, you’re going to keep that person alive, and ultimately you’ll fight another day.” Landlords that refuse may inadvertently punish themselves, especially if they drive their tenant out of business: “It’s going to take months for him to get someone in there,” he said, “and by the way, he’s not going to get someone in there at the same rate as the last guy paid anyway, because no one’s going to pay the same rates as they would have paid six months ago or a year ago.”

Still, introducing outdoor seating, Camac said, did at least show the world that a restaurant was there to stay. Opening up tables might drive takeaway sales and help keep the restaurant afloat, he said, especially if it could be used to drive social media attention. “The only reason to bother is for marketing, it’s for the neighborhood, it’s to show people you’re there. But no, you can’t make money. There’s no money to be made there.”