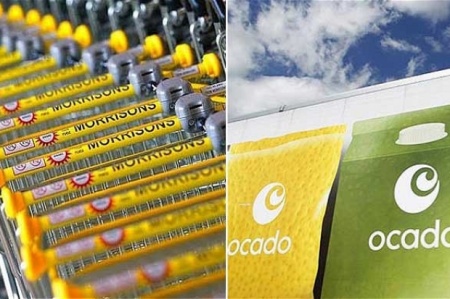 Amazon has fired its latest salvo in the food retail battle by striking an agreement with Morrisons that means selected Prime Now customers  will be able to order one-hour grocery deliveries.

Orders will be picked at a local Morrisons store and delivered the same day by Amazon either within one hour for £6.99 or in a two-hour slot for free. The service has been initially launched in selected postcodes in London and Hertfordshire, although analysts expect the service to be rolled across the country, as Amazon has done with its Prime service.

Amazon and Morrisons struck an initial wholesale supply agreement in February, despite the Bradford-based supermarket already having a commitment with online grocer Ocado. Morrisons renegotiated its contract with Ocado in August to allow it to pick from stores, which extended its coverage nationwide.

Morrisons’ announcement of its closer ties with Amazon has sent Ocado shares tumbling more than 6pc in early trade, to £2.65, amid concerns that Amazon is now making a serious attempt to seize a share of the UK’s online grocery market. Morrisons’ shares rose 0.6pc.

The British online grocer has frustrated investors by missing its own self-imposed deadline to strike a deal to license its technology to an international partner by the end of 2015.

Analysts at Shore Capital, Morrisons’ house broker, said the agreement could extend Morrisons’ reach in the South East, where it has fewer stores, and “catapult” its access to the convenience market, “where it has no physical presence”.

Morrisons sold off its 140-strong M Local convenience store chain and closed 28 underperforming supermarkets last year and continues to have less presence in the south east than its “Big Four” rivals.