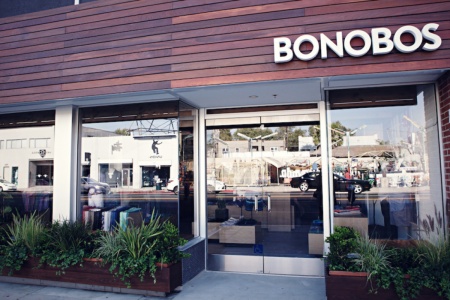 Walmart has agreed to acquire the men’s clothing company Bonobos for $310 million.

The purchase is part of a sweeping effort by the world’s largest retailer to revamp its business model as it tries to better compete with Amazon, which on Friday announced that it would buy the upscale grocer Whole Foods for $13.4 billion.

Bonobos, founded 10 years ago in New York, began by selling simple chino pants on the internet. In recent years, it has expanded to offer shirts, suits and other men’s clothing, and has opened dozens of brick-and-mortar locations, as well as boutiques in Nordstrom department stores, a previous investor in the start-up.

Yet even as Bonobos has become a more conventional retailer, it has maintained its online ethos, offering generous shipping and return policies and calling its customer-service agents ninjas. Even its stores have a twist — customers are fitted on site, but the clothes are later mailed.

This sensibility, and Bonobos’s sustained growth, are what attracted the interest of Walmart.

Walmart is working aggressively to transform itself into a dominant force in e-commerce. When the company bought Jet.com last year for $3.3 billion, it installed the Jet founder, Marc Lore, to lead its e-commerce efforts in the United States and gave him a mandate to expand quickly.

Less than a year later, Mr. Lore and his team have already begun transforming the way Walmart sells things online — and now have bought their most prominent retail brand to date.

The deal has been widely rumored since April. When Recode first reported news of the sales talks, some observers speculated that Walmart’s ownership would damage the Bonobos brand.

But for now, there are no plans to offer Bonobos’s $98 chinos or $128 dress shirts in Walmart’s 5,000-plus stores. Instead, Walmart is hoping to learn from Bonobos. Its co-founder and chief executive, Andy Dunn, will oversee Walmart’s digital brands, which also include the independent women’s brand ModCloth.

“I saw Walmart acquire Jet and then ModCloth, and, I thought, they get the future of e-commerce is brands,” Mr. Dunn said in a telephone interview.

The deal is taking place as the retail industry faces broad upheaval, as scores of traditional bricks-and-mortar sellers struggle to keep customers who are increasingly used to buying online. Onetime retail stalwarts like Macy’s and Sears have seen sales drop as they struggle to figure out e-commerce strategies, while a host of smaller retailers have filed for bankruptcy protection.

Walmart, which has long grappled with how to keep up with Amazon, redoubled its efforts last year by acquiring Jet, a promising but unprofitable marketplace. It is paying Mr. Lore a princely sum to spearhead the revamping of its e-commerce strategy.

The Jet deal led to a flurry of changes for Walmart’s online sales model. It began offering free two-day shipping without requiring a membership fee, as Amazon does. It drastically expanded the number of items being sold online. It brought on talent like Jenny Fleiss, a founder of Rent the Runway. And it created Store No. 8, a division meant to help hatch new online businesses.

It has also gotten serious about acquiring more brands born on the internet. Walmart and Mr. Lore had already spent $166 million buying start-ups like ModCloth and Shoebuy.com. But buying Bonobos is the biggest step yet.

Amazon To Acquire Whole Foods Market For $13.7B