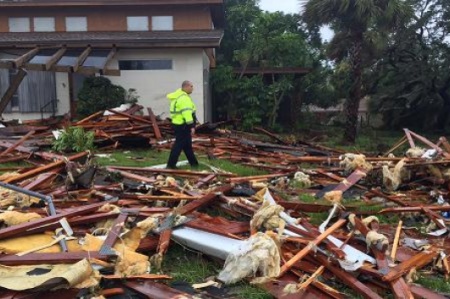 Wal-Mart promised another round of donations to help those people impacted by hurricanes in the U.S. so far this year.

The big-box retailer has said it will match customer donations, two-to-one, with cash and product donations of up to $10 million. The latest announcement brings the total committed by Wal-Mart toward hurricane relief efforts in 2017 to $30 million.

In finding a way to use these funds, Wal-Mart has launched a new campaign with the American Red Cross to assist with hurricane relief more broadly.

During the run of this campaign, customers can donate to the American Red Cross within Wal-Mart and Sam’s Clubs stores, or online. For every $1 given, Wal-Mart will contribute $2, or product of equal value, the company said. Donations will be accepted through Sept. 16.

In trying to service those communities that need food and water most, Wal-Mart has said it’s working to “quickly” reopen affected stores in the wake of Hurricane Irma in Florida.

So far, the Arkansas-based retailer has shipped more than 1,700 truckloads of supplies to those in need.

Notably, Wal-Mart has 8 percent of its brick-and-mortar fleet in Florida, or 375 facilities. Costco has 23 stores in the state, while smaller rival Target operates 122 locations there, according to recent filings with the Securities and Exchange Commission.

On its website, Wal-Mart has an updated list of closed facilities in Florida and also those in Georgia and South Carolina. A map, last updated Sunday evening, showed one Wal-Mart store opened in Jacksonville, Florida, and five locations open in the utmost Northwest region of the state.

Target has a similar running list online of store closures, with a slew of Georgia and South Carolina locations impacted, as well.

It’s been estimated that the potential economic impact from lost retail sales in the “consumer/retail” sector from Hurricane Irma is expected — in total — to be $1.45 billion, according to weather analytics firm Planalytics.