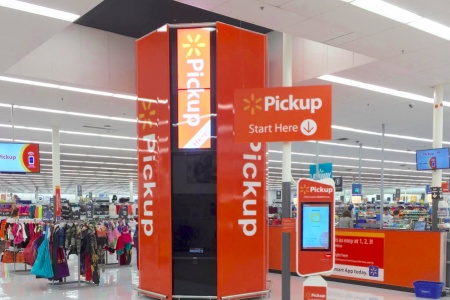 Walmart is ramping up its rollout of self-service kiosks that retrieve customers’ online orders, the company told Business Insider.

The first kiosk appeared in a Walmart store in Bentonville, Arkansas, last year.

Walmart now has the machines in 20 stores, and plans to add them to 80 more stores across the country over the next several months, the company said.

The kiosks, which Walmart calls Pickup Towers, are massive — standing at least 16 feet tall and about 8 feet wide — and are typically near store entrances.

To use the tower, customers scan a barcode on their purchase receipt. Within 45 seconds, a door on the machine opens, and the items appear on a conveyer belt.

A customer of the Gilbert, Arizona, Walmart told Business Insider that the service was a vast improvement from the retailer’s regular in-store pickup process.

The machine is giant because it holds tons of packages inside, but it’s more versatile than pickup lockers — which Walmart has also tested — because it can adjust the size of the compartments where packages are kept.

Walmart spokesman Justin Rushing said the towers could be rolled out to more stores based on customer feedback.

“Our Pickup Towers are the latest example of how we’re using new technology to save our customers time in addition to money,” he said. “We’re continuing to listen to our customers and will use their feedback to determine the future expansion of the Pickup Tower.”

The company also rolled out a new discount this year for shoppers who purchase items online and pick them up in stores, allowing them to save as much as $50 on large items like flat-screen televisions.