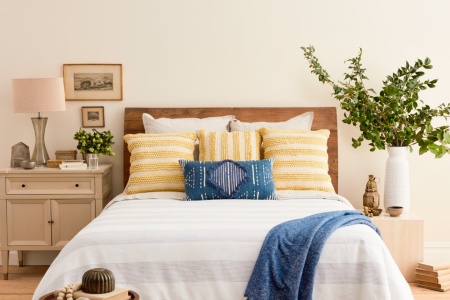 Walmart is starting its own mattress and bedding brand that will be sold exclusively online, part of the giant retailer’s effort to bolster its e-commerce business.

The new line, which will include items like pillows and throws, will be sold through a separate website, AllswellHome.com, but it will not be immediately available on the company’s flagship website Walmart.com or in its roughly 4,700 stores.

The new offering — which Walmart describes as an “Instagram-worthy dream bed” — aims at the more affluent and digitally savvy customer that the retailer has been making a big push to reach in recent years.

Previously, the company sought to tap this market with a string of acquisitions of e-commerce brands like Bonobos, which sells hip men’s clothes.

But the mattress and bedding venture represents the first digitally native, or online only, brand that Walmart has developed internally.

The Allswell venture, which goes live next month, comes as concern mounts on Wall Street about Walmart’s e-commerce performance.

On Tuesday, Walmart’s stock cratered after the company reported that e-commerce sales growth had slowed considerably in its fiscal fourth quarter, which included the holiday shopping season.

The company blamed operational glitches in its fulfillments network for some of the problem. But the pronounced slowdown, after several quarters of blistering online growth, caused analysts and investors to question whether there were deeper issues with Walmart’s online strategy.

The company has spent handsomely on its online efforts, including the $3.3 billion acquisition of Jet.com in 2016, which at the time was the largest price paid for an e-commerce company. It also bought Modcloth, the e-commerce clothing brand, and Moosejaw, which sells outdoor gear.

These investments are part of Walmart’s response to its rival Amazon, which continues to dominate online retail.

The bet with the mattress and bedding line is that women, in particular, will be drawn to the convenience and premium style of the new brand, which is carefully curated on the website.

Walmart is offering two mattresses — one soft version and one firm. They range in price from $495 for a twin to $1,035 for a king.

In recent years, there has been a boom in upstart mattress sellers like Casper and Leesa, which have sold their products primarily online. Their success showed that many customers were willing to buy a mattress without trying it first in a store.

But even some of these companies have teamed up with large conventional retailers like Target and Pottery Barn to offer their mattresses in stores. Amazon also sells mattresses and bedding.

Arlyn Davich, who founded an online service that helps lower-income people with financial planning and nutrition, will run the Allswell bedding line for Walmart.

Allswell will allow customers a 100-day trial of the mattress and will not charge for returns, a standard practice for online mattress sellers.