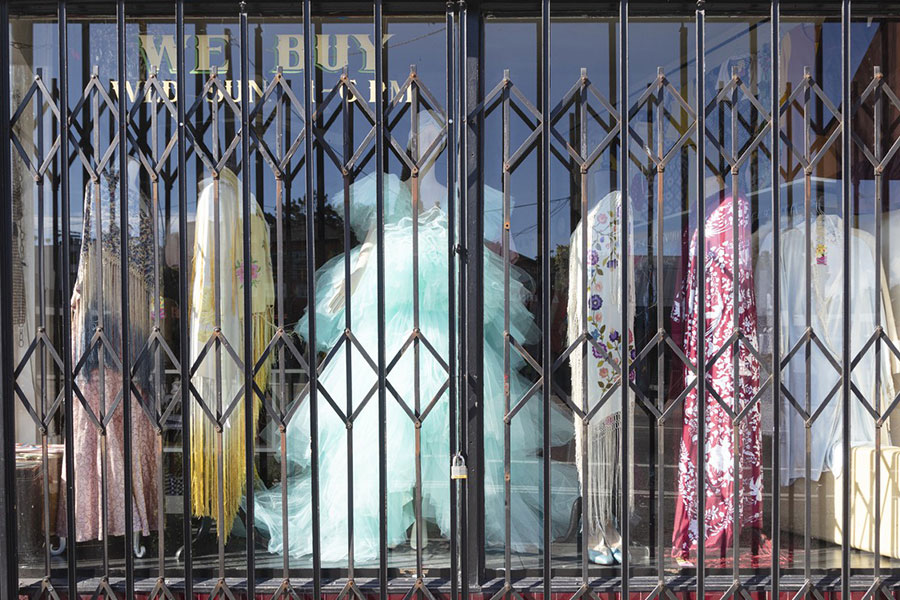 Outside of Boston, a marketing company is struggling to figure out how to cover its bills. In Indiana, a dance studio is waiting on three emergency-loan applications. In Baltimore, a deli is closed and desperate for help.

The government is engaged in an unprecedented effort to save such companies as pandemic-related shutdowns stretch into the spring. But Washington’s policies are too complicated, too small, and too slow for many firms: Across the United States, millions of small businesses are struggling, and millions are failing. The great small-business die-off is here, and it will change the landscape of American commerce, auguring slower growth and less innovation in the future.

Small businesses went into this recession more fragile than their larger cousins: Before the crisis hit, half of them had less than two weeks’ worth of cash on hand, making it impossible to cover rent, insurance, utilities, and payroll through any kind of sustained downturn. And the coronavirus downturn has indeed been shocking and sustained: Data from credit-card processors suggest that roughly 30 percent of small businesses have shut down during the pandemic. Transaction volumes, a decent-enough proxy for sales, show even bigger dips: Travel agencies are down 98 percent, photography studios 88 percent, day-care centers 75 percent, and advertising agencies 60 percent.

This deep freeze has posed a singular policy challenge: The government has never before been tasked with figuring out how to put a majority of the country’s businesses on life support. “We know how to support the financial system. It goes all the way back to Walter Bagehot,” Satyam Khanna, of the Institute for Corporate Governance and Finance at NYU’s School of Law, told me, referring to the 19th-century British thinker. “There’s a playbook to follow. What we don’t know how to do, or had no idea how to do, is provide direct support to your local coffee shop at scale.”

Congress and the Trump administration came up with a $350 billion plan to provide forgivable loans to small businesses, now amplified by a second tranche of $320 billion. The Small Business Administration’s Economic Injury Disaster Loan initiative provides small grants to small firms; its Paycheck Protection Program has small firms apply to retail banks and credit unions for loans of up to $10 million, intended for expenses such as rent, insurance, utilities, and wages. The PPP loans become grants, provided that employers retain their employees and spend 75 percent of the money on payroll.

Since it went live in early April, this rescue effort has been beset with implementation problems. Banks were unclear on what information to collect and were overwhelmed with applications. Small businesses had difficulty figuring out where to put in their paperwork, and what was available to them to begin with. Millions of massage therapists and cupcake makers and furniture companies were left adrift. A survey by the National Federation of Independent Business showed that four in five applicants to the two emergency programs were unsure whether they would receive help when the first tranche of money ran out.

Even successful applicants describe the process as a mess. Jackie LaVana owns a marketing firm in the Boston area. “It’s small but mighty,” she told me. “Me at my kitchen table,” plus a team of subcontractors who help her create online advertising campaigns. “I was having my best year ever” before the coronavirus pandemic, she said. But her company has since taken a 25 percent hit to revenue, if not higher.

LaVana watched the congressional rescue process closely and spent hours on text and email threads, talking with friends in the accounting and legal trades and with other small-business owners. Everyone had questions. What version of the program did they need? Who would even let them apply? Did they qualify? Would they meet the requirements? “It was complete confusion,” LaVana told me.

The Village Bank in Wayland, Massachusetts, where LaVana’s company has an account, initially said it could process her application, then told her it could not help her, because her company did not have a commercial loan. Other financial institutions told her that she needed an account with them to apply, or did not respond to her queries. She had finally managed to move forward with a small bank in western Massachusetts, before her own bank got back to her and said it would, in fact, be able to help.

The money would be enough to “keep the lights on,” she told me. One of the worst facets of the crisis, she feels, is that so many small businesses in her community are ailing together, and so many have not received help: “This is spiraling,” she said. “My ability to run my business allows my home day-care [provider] to get paid, and they’re also seeking a disaster loan. I want to support the businesses that sustain me, but I feel like I need support to do that.”

The problems with the relief package run far deeper than a flubbed rollout. For one, banks have been prioritizing applications from bigger clients; some have even developed “concierge treatment” options for wealthy firms. Even after some congressional fixes, the small-business plan, in that way, has helped big small businesses over small small businesses, and established small businesses over new small businesses, as the approval of loans to brand-name companies such as Shake Shack, Ruth’s Chris, the Los Angeles Lakers, Potbelly, and others has demonstrated. (Under public pressure, these companies have returned the funding.) Much of the help has gone to the companies that need it the least, among them firms with employee counts just under the SBA caps, franchises of major chains, and publicly traded firms, which are by definition able to raise money from investors. As structured by the federal government, “it was inherently regressive,” Khanna said.

Indeed, loans of $1 million or more soaked up half of the initial $350 billion allocated by Congress. Whiter, less populated states got more loan money per capita, with Vermont, North Dakota, and Minnesota overrepresented and Nevada, Florida, and California underrepresented. Researchers found no evidence that money went to the places and industries hit hardest, as measured by business closures and declines in hours worked. The accommodation- and food-services sector accounted for two in three jobs lost, but received just 9 percent of federal aid dollars.

The program is generating inequality in other ways too. One of the businesses that has applied but not yet received aid belongs to Jessica Yang’s parents, who sell sandwiches and groceries at a deli in Baltimore. The shop has closed, unable to make a takeout-and-delivery model work with no notice: The deli had no online presence before the shutdown, and services such as DoorDash and Uber Eats charge such large commissions that it would “never break even on an order,” Yang told me. The SBA was its only hope. “I heard that we would hear back in three to five days,” she said. “My parents keep calling me and asking if I’d heard anything. Then we read in the news that the program reached its limit. I wonder if that has anything to do with it. Maybe there’s just no money to go around.”

Yang said that her parents’ ages and backgrounds complicated the application process: Her father is in his 60s; her mother is in her 50s and does not speak English fluently. “For first-generation Koreans, how are they getting accurate information?” Yang asked. “I don’t want people like my parents to miss out on these opportunities because the process of applying is complicated.”

In other ways, the SBA programs are too little, too late. John Lettieri of the Economic Innovation Group, a Washington, D.C.–based research and advocacy organization, explained to me, “If you have a short-duration crisis that causes a lack of liquidity across small businesses, followed by a quick return to normal, PPP is going to help a lot of businesses. But does that sound like what we’re facing? Not to me.”

Among the issues that EIG and other advocates are pointing to: The program is not big enough, because businesses likely require an estimated $1 trillion in relief. The maximum loan size, at $10 million, is too small for many firms to cover payroll and other expenses. The program disadvantages companies with high overhead costs, such as businesses that need to pay rent in expensive cities. It requires employers to keep workers on the books, when many would financially benefit from being laid off and receiving enhanced unemployment-insurance payments. Finally, its timetable is far too short, given that formal shelter-in-place orders are expected to last for months, and the consumer economy is expected to remain weak for a year at minimum.

Facing mounting bills and absent revenue, many businesses are closing permanently, rather than drifting further and further into insolvency. “When responding to something like this, you’re not just dealing with dollars and cents. You’re dealing with toxic and pervasive fear and uncertainty,” Lettieri told me. “I can’t take for granted that Congress will extend this program, and that I’ll have a business worth running in three months. I’m going to burn through the cash I have in pocket, so why not cut losses now?” Surveys indicate that one in four small businesses does not expect to survive; an additional one-third are uncertain of their potential to withstand the cataclysm.

The short-term effects of this disaster are clear: When businesses liquidate, they lay off workers, who spend less in their local economies, making other businesses weaker, necessitating further layoffs. Business failures thus act as an accelerant in a downturn, making temporary damage permanent. This is a central reason why many economists do not expect a sharp, V-shaped rebound to the current recession, but a long, slow, U-shaped recovery.

But the decimation of American small businesses will inflict more insidious, long-lasting harm too. “We are seeing a complete wipeout of a cohort of entrepreneurs and young firms,” Lettieri said. “And there’s nothing coming up behind them.” The pandemic will mean the triumph of franchise chains over mom-and-pop shops, of C-suite executives over entrepreneurs working in their basements. It will mean town centers filled with banks and 24-hour pharmacies rather than bookstores and nail salons and takeout counters. It will also mean fewer start-ups competing with incumbents.

Ultimately, this means a less competitive American economy. New companies and small businesses drive net job growth in the U.S. They generate more productivity growth than bigger and established businesses. The great small-business die-off will fuel industry consolidation, which will both depress wages for workers and increase prices for consumers. More inequality, more sclerosis, and a smaller GDP: These are some of the legacies the coronavirus pandemic is leaving.