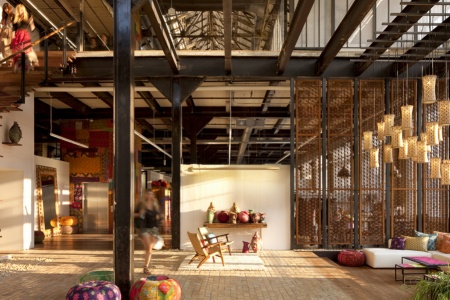 Walking into an Anthropologie store is a sensory experience, incomparable in its visual richness and tactile quality to that of most other retailers. An ode to the cultured bohemian, a rainbow of floral-etched serving bowls might be stacked on a found-wooden table, a suite of turquoise-accented flatware laid out nearby. Just steps away, next to a velvet armchair piled with hand-woven pillows, one might find a rack of embroidered tunic dresses or patchwork skirts.

Located in a former Barnes & Noble, the space — three times the size of a typical Anthropologie — includes a dedicated shoe salon featuring 350 styles from more than 50 brands, ranging from Rachel Comey to Loeffler Randall, a beauty nook with more than 800 products and tools from more than 90 brands, including Sunday Riley and Eve Lom, as well as 12 full-scale build-outs of living spaces. There’s also a “design centre,” where shoppers can flick through fabric swatches for custom furniture, peruse wallpaper sample books and receive a consultation from a “home stylist.” Anthropologie’s sister brands — weddings-focused BHLDN and gardening-centric Terrain — also have a major presence in the store. At the BHLDN shop-in-shop, brides can book a private appointment to try on one of the label’s romantic, vintage-inspired dresses. Terrain — which has standalone stores in Westport, Connecticut, and Glen Mills, Pennsylvania — sells outdoor-lifestyle items like birch wreaths decorated with foraged plants, antiqued iron lanterns and glass terrariums.

On November 18, an Anthropologie & Co. location will open at the Stanford Shopping Center in Palo Alto, California. In addition to BHLDN and Terrain, the Silicon Valley outpost will also house a restaurant from the Vetri Family dining group, which was acquired by URBN — which owns Urban Outfitters and Anthropologie — in February 2016. Two other Anthropologies —  one in Portland, Oregon, another in Newport Beach, Calif. — have been converted into Anthropologie & Co. locations, and another will open at King of Prussia Mall in Pennsylvania this Friday. Yet another is planned for Westport, Connecticut, in the spring of 2017.

“In many ways, this turns back to the heritage of the great, original department stores,” says David W. McCreight, chief executive of the Anthropologie Group — which also includes Terrain and BHLDN — and president of URBN. Indeed, what McCreight and his team are proposing reflects what so many traditional department stores are currently attempting to master: destination retail that not only attracts foot traffic but compels the customer to carry on with their shopping for more than 30 minutes.

And Anthropologie has several advantages. For one, the company has always had an authentic lifestyle concept around its apparel offerings. At URBN, it’s called “life stage” retail, and it’s the philosophy the company was founded upon in 1970.

It was then that current URBN chief executive Richard Hayne opened Free People, a shop with his college roommate that sold second-hand clothes, jewellery and furniture. That store morphed into Urban Outfitters, and in 1992, Hayne and his wife, Margaret, opened Anthropologie, an elevated brand targeting women who had perhaps grown out of the youth-and-trend-driven Urban Outfitters aesthetic. Free People, which had for years been sold as a label at “Urban” and “Anthro,” as they are casually referred to, was spun off as its own concept in 2002. (Along with serving as URBN’s chief creative officer, Margaret Hayne is also currently chief executive of Free People.) In 2008, Hayne’s personal obsession with gardening fuelled the development of Terrain, and in 2011 came BHLDN, which tapped into the need for alternatives in the wedding market. In many ways, the recent acquisition of the Vetri Family restaurant group rounds out the URBN portfolio, although there are clearly more opportunities to tap in beauty, wellness, home goods and travel.

To test the Anthropologie & Co. concept, McCreight built a mock store in one of the URBN-owned buildings at The Navy Yard in Philadelphia, which has served as the company’s campus since 2006. “We set it up across the street, mocked it up and liked what we saw. Then we invited some of our best customers from Manhattan to Washington, DC, to come in for a day,” he says. “We didn’t tell them what was going on. Had them walk and had them give feedback. The way they lit up, we knew we had something.”

To be sure, Anthropologie & Co. feels like a natural evolution for the Anthropologie brand, which has roughly 220 locations in North America and Europe. URBN, unlike many of its competitors, does not suffer from overstoring. McCreight envisions the Anthropologie & Co. fleet topping out at 30 to 40 stores. “Everyone is trying to think about how to differentiate and distinguish their brands, and lifestyle is the way they’re doing it,” says Dana Telsey, chief executive of Telsey Advisory Group, an equity research and consulting firm. “There are not going to be a lot of these large-format stores. Instead, they’re going to be halos for the brand.”

A larger footprint also allows Anthropologie to expand its offerings outside of apparel. Like many speciality retailers facing competition from both fast fashion players and e-commerce startups, the brand has faced a challenging few quarters after years of growth. In the quarter ending July 31, 2016, sales at the Anthropologie Group were $368 million, flat from the same period in 2015, with comparable store sales down 3 percent. “The apparel side of the business carries a high degree of both competitive pressure and fashion risk,” says Oliver Chen, an analyst at Cowen & Co. “Building on categories outside of apparel such as home, beauty, jewellery and intimates make a lot of sense. It means diversification and risk management because apparel is so fashion sensitive, and a shopping experience that’s enhanced.”

While URBN is a company that embraces instinct, it has also used its digital footprint to determine which categories resonate deeply with the Anthropologie customer. “It used to be that merchants would come in Monday morning and look at sales,” McCreight says. “Now we are coming in talking about social. It’s a way for her to speak to us or to eavesdrop and observe conversations about brands. The little insights give us the most profound advice.”

Superstores are also not entirely new to the URBN family. Urban Outfitters has long experimented with unique formatting, opening a 57,000-square-foot store on New York’s Herald Square in 2014, complete with a beauty salon, Amoeba Music record store and cafe serving coffee from La Colombe coffee, another Philadelphia business. McCreight, who assumed the role of president of URBN in February 2016 on top of his duties at Anthropologie, has also observed how the parent company’s namesake brand was able to quickly course correct after a down period. (In the last quarter, sales at the Urban Outfitters were $354 million, up 4 percent from the same period in 2016, with comparable store sales up 5 percent.) “Anthro and Urban have shown a very good track record of responding,” he says.

And while expanding categories — and footprints — will certainly contribute to the future health of the brand, URBN’s operational approach will also contribute. “Anthropologie has done a great job of managing inventory tightly, and margins have been good since they’ve not been overbuying,” Chen says. Adding more proprietary brands in categories outside of apparel — such as home, beauty and apparel — will also help to improve margins, Telsey adds.

McCreight and his team are also looking abroad — to Europe in particular — for expansion opportunities. (The store’s first London location opened in 2009.) “We believe now there is an opportunity to grow major markets digitally, where the first impressions may be from the store that they’ve seen in the capitals of Europe or America,” he says. “We are in the early stages of that strategy.”

To be sure, wherever Anthropologie lands, it will be with a specificity and patina wholly germane to the brand, which, McCreight believes, is in many ways bigger than the business. One can’t help but wonder, with the news of home goods purveyor West Elm entering the hospitality realm if an Anthropologie & Co. hotel could the next step? The company has been approached several times by potential partners, but nothing has made sense thus far. “We’d rather have a more curated experience, where we control most of it,” he says. After all, this is a retailer where experience seems to actually mean something.

The best examples of how retailers are using Augmented Reality