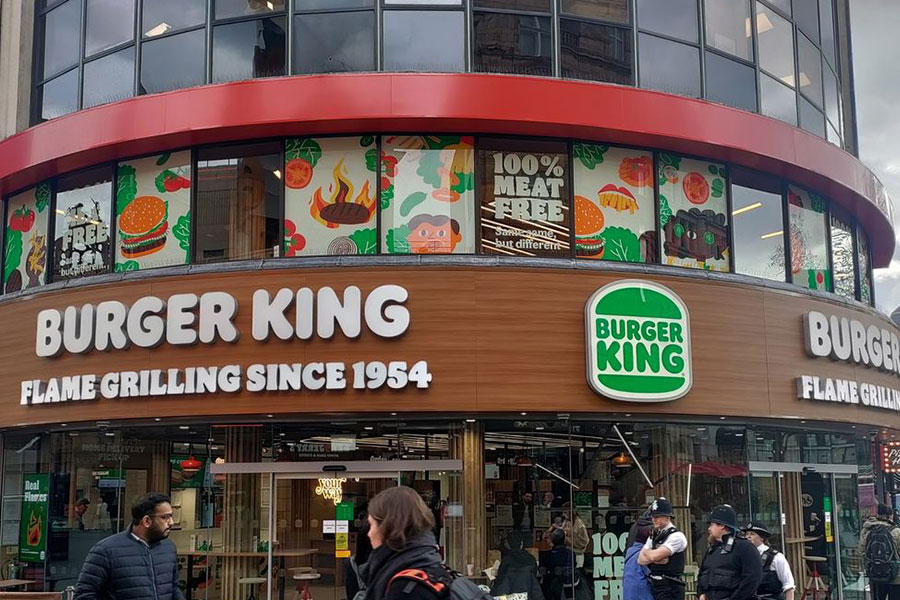 A vegan Burger King branch opened its doors today – and we visited the restaurant to test out its new range.

The revamped London Leicester Square restaurant is serving fully plant-based fare, including its well-reviewed meat-free Whopper and Royale alongside a ‘cheeeze and bakon’ burger.

The fast-food chain has told how it plans to serve a 50% meat-free menu by 2030 – but will customers be interested.

The Mirror visited the restaurant today, with one meat-eater and vegetarian in tow to review the limited menu, which is available until April 10.

The fast-food chain has even said it will be keeping an eye on the most popular items on the menu, with a view to making some of them nationally available in the future.

Other options include the Vegan Nugget Burger, a Plant-based Double Cheeezeburger, as well as sides Vegan Chilli Cheeeze Bites.

It has a meat-free menu

Clearly, there’s a massive demand for vegan products, as we rock up to find a queue of hungry customers snaking around busy Leicester Square on Monday afternoon.

Waiting patiently in line, Nicola Jones, from Chichester who turned vegan four years ago after 35-years as a vegetarian. She told the Mirror: ‘We came up to London for the weekend, saw this and knew that we had to try it.

“The fact it’s all meat-free, that’s really reassuring as you know it won’t be contaminated. We were surprised to see it so thought we had to support it.” Meanwhile, Eleisha Kennedy, who has been a vegan for six years, said she was intrigued by the range on offer despite not being a self-professed fast food fan.

She said: “My friend told me it was happening so I thought I’d nip over from work out of curiosity. I think choices are so much better now, when I turned vegan, I’d have to be content with chips and salad.“I don’t eat a lot of fast food and I’m not too keen on those companies, but it’s a little treat. It’s mostly curiosity.ù

“I’m most excited about the nuggets, as who doesn’t like a chicken nugget?”Tourist Kathy Alvrez, who was visiting from California, said she was always intrigued to try the new vegan fare.

She said: “I wanted to support this launch, I’ve been vegan for ten years and menus have changed a lot.

“I’m keen to try a milkshake and chicken nuggets. I would like to try it all. It’s nice not having to wonder if it’s actually vegan.

Zahra: The blander option of the menu – could be better if it had more of a variety of flavours and textures like the cheese and bacon whopper. Lacks freshness (no herby/crunchy greens) and was a little burnt, with an aftertaste.

Rosie: This wasn’t my favourite. Unlike a meat patty, the vegan burger didn’t hold up that well to being chargrilled. The curry sauce is tasty, but I agree with Zahra, it is crying out for some herbs and crunchy greens, possibly in a zingy dressing. A little bit cloying.

Zahra: This is supposed to imitate the taste of chicken, the patty is quite flat and the texture is not overly similar to chicken, but overall it is still tasty!

Rosie: There are better fake chicken burgers out there, but this is pleasantly tasty, with a nice coating. Could perhaps do with something jazzier than mayonnaise in it, possibly a hot sauce? It feels a little flat, but the bread roll is surprisingly decent.

Lush launches first ever 24 hour pop up in London