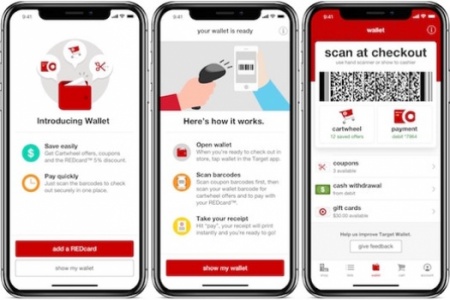 While it still will not accept Apple Pay or other third-party mobile payment options in its stores, the Minneapolis-based retailer is going the route of Walmart and others who have devised their own mobile wallets inside their smartphone apps.

Target is rolling out the feature this week to holders of its Redcard credit and debit cards after a soft launch last week. Users are now able to combine their Cartwheel deals, weekly ad offers, as well as the 5 percent discount afforded through Target’s branded cards.

Target said using mobile payment through its app is up to four times faster than using other forms of payment, such as with a physical credit card. Soon, it will add a feature that allows users to store and redeem gift cards through the “Wallet” feature.

The mobile wallet works on both Android and iOS versions of the Target app.

While Target’s mobile wallet is currently limited to Redcard holders, Mike McNamara, Target’s chief digital officer, told reporters at the retailer’s holiday briefing in October that the plan is to expand it to non-Redcard holders after the initial launch.

Other retailers such as Walmart, Kohl’s and CVS also offer their own mobile wallets.

While mobile payments have been round for awhile, with Apple Pay launching in 2014, they have not yet taken off in terms of popularity.

Part of the issue is that consumers haven’t found a lot of extra value in using mobile payments over swiping or inserting an old-fashioned credit card at checkout.

A study by Pymnts.com found that while Apple Pay is still the most tried and used mobile wallet, the percentage of people trying it has flattened out in the last year.

Only 5.5 percent of people who have and can use Apple Pay for transactions do so, compared to 5.1 percent for Walmart Pay, 3.3 percent for Samsung Pay, and 1.8 percent for Android Pay.

Retailers such as Best Buy, Macy’s and Walgreens accept Apple Pay. But Target and Walmart remain holdouts as they have focused instead on rolling out their own mobile wallets that incorporate in-store promotions and rewards and allow them to more easily collect data on transactions.

Some retailers such as Target, which suffered a massive data breach in late 2013, have also prioritized updating their systems to accept chip-and-PIN transactions in recent years.

Walmart Pay launched nationwide in early 2016 and has apparently been gaining traction. A Walmart executive told Bloomberg last month that Walmart Pay is enrolling tens of thousands of new users a day and should soon surpass the usage of Apple Pay in the U.S. in terms of use by shoppers in stores where they are accepted.

Toys R Us to shutter 26 stores in UK, focus on smaller shops