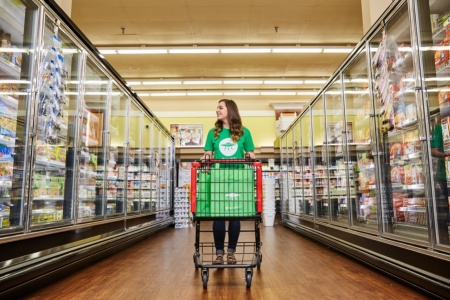 Target plans to boost its same-day delivery capability by paying $550 million for Shipt, its latest move to try to catch up with Amazon.

Shipt, which charges members $99 a year, sends people out to choose and deliver groceries from stores. Target said Wednesday that it will add more products to the service next year, such as home goods and electronics. Target shoppers will have to make orders through Shipt’s app or website and pay the annual fee to get same-day delivery. There are plans to incorporate Shipt into Target’s app and website, but the companies did not say when that would happen.

Retailers have been looking for ways to speed up delivery as they try to match the fast service offered by Amazon.com Inc. Earlier this year, Target bought a delivery logistics company to offer same-day service to in-store shoppers.

Minneapolis-based Target expects half of its 1,800 stores to offer Shipt’s service by next summer. It’ll be available at most of its stores by the 2018 holiday shopping season, it said.

“This is yet another example of a brick-and-mortar retailer leveraging its physical assets to improve its online offerings,” said Moody’s retail analyst Charlie O’Shea.

Shipt, founded in 2014, will operate independently from Target and remain in its headquarters in Birmingham, Alabama. Shipt said it will keep working with other retailers, such as Costco and Meijer. Shipt said it won’t share customer data from Target’s rivals with its new owner.