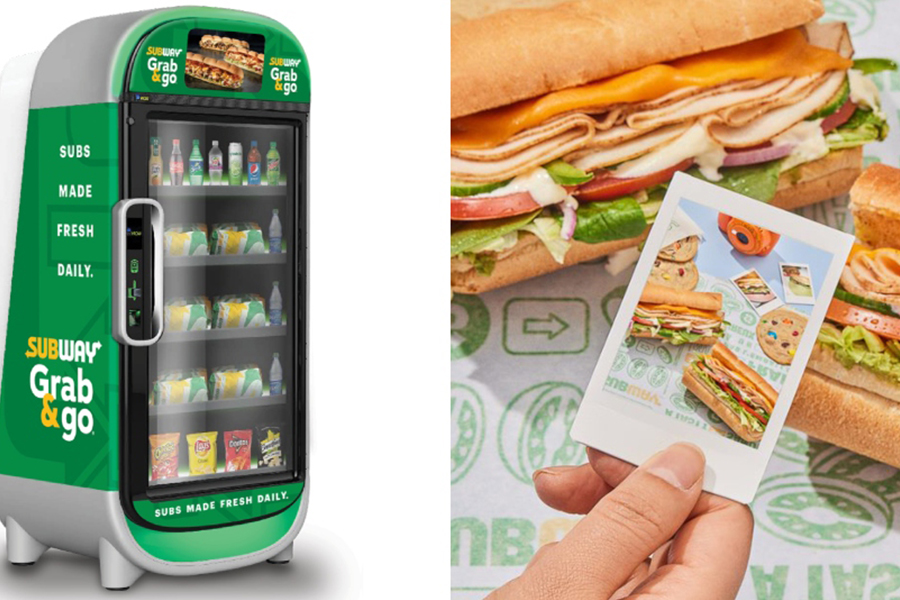 The quick-service sandwich chain is basing expansion plans on “grab & go” stores that serve customers who are in a hurry, outside of its traditional brick-and-mortar locations. These include Subway’s first-ever smart fridge, opened in September 2022 at the University of California San Diego.

Featuring artificial intelligence and natural language processing, the fridge enables customers to talk directly to it and ask about any of the products inside. Weight-sensor shelves help ensure customers are charged correctly, resulting in a completely contactless and cashless transaction. UV-C light sanitation occurs after every purchase.

The smart fridge is supported and stocked fresh daily by a nearby Subway franchise restaurant location. According to the retailer, initial feedback on the smart fridge is positive, with college students enjoying the convenience and ease of being able to get a sandwich at any time of day. Subway says it is already seeing interest across its system of franchisees in smart fridges.

In 2020, Subway began piloting its Subway Grab & Go platform, in which sandwiches are prepared fresh daily by franchisees and distributed to Subway Grab & Go retail locations, including casinos, convenience and gas stores, hospitals and airports. Now available in more than 400 locations across North America, in non-traditional locations including airports, truck stop plazas, college campuses, convenience and gas stores, and hospitals, Subway Grab & Go serves as the basis for several off-premises concepts, with plans for continued growth in the coming year.

“Subway Grab & Go has quickly gained traction as consumers are drawn to sandwiches made fresh daily from a brand they know and love, versus competitor items that rely on a 14-day plus shelf life,” said Karla Martinez, director of innovation for non-traditional development. “As Subway continues to expand off-premises concepts, guests can expect to find Subway Grab & Go and smart fridges in more convenient everyday places like airports, college campuses, and hospitals.”

Subway relaunches catering
In another effort to expand its range of customer touchpoints, Subway launched a redesigned catering program in spring 2022. In addition to a continued ability to place customized orders, customers can now streamline the ordering process with pre-selected platters and lunch box options.

Customers can also place catering orders for delivery or pickup, no matter the size or type of event. In addition to refreshing its entire catering program, Subway is also making its debut as a catering provider on the ezCater digital corporate food solutions marketplace. Subway catering orders can be placed digitally via the Subway website or app, as well as through the ezCater site.

Subway operates more than 37,000 restaurants across more than 100 countries. Restaurants are owned and operated by a network of over 20,000 Subway franchisees.