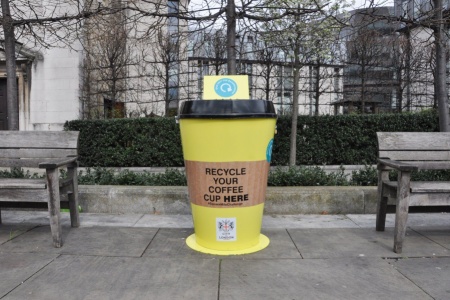 Starbucks has this week introduced its 5p paper cup charge to all 950 UK stores, with the proceeds of the charge to be used by environmental charity Hubbub to fund a plastic boat set to clean up waste in the Thames.

The national rollout of the 5p charge comes after a successful trial across 35 London stores that led to a 126% increase in reusable cup use, which also entitles customers to a 25p discount.

Around 2.5 billion paper coffee cups are thrown away annually in the UK and Starbucks is one of the many high-street firms taking action to improve recyclability and promote reuse. The company has in-store paper cup recycling bins aimed at encouraging customers to return take-away cups back into the store and boost overall recycling levels.

Having previously worked with Hubbub on the charity’s Square Mile waste behaviour change initiative, Starbucks will now use the 5p “latte levy” to fund a boat made from plastic that will be used to collect plastic waste from the Thames and educate local schools and businesses.

Late last year, Hubbub took a boat made from 99% recycled plastic on its maiden voyage from London’s Canary Wharf Docks. The “Poly-mer” boat has so far completed 36 trips to clear litter from the area, including more than 800 plastic bottles, in partnership with local schools and businesses.

Hubbub will now launch a second boat in August in Richmond, West London, which is the first in a plethora of new initiatives that Hubbub hopes to introduce by using the funding from Starbucks.

Starbucks has also committed £7m in partnership with Closed Loop Partners and its Center for the Circular Economy to introduce closed-loop solutions for disposable coffee cups and will provide funding alongside McDonald’s to introduce alternatives to plastic straws and lids at a later date.

Globally, Starbucks has pledged to eliminate single-use plastic straws from its operations by 2020.