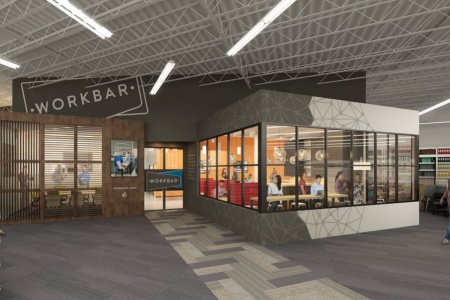 Staples Inc. has found a new use for some of its roomy office-supply stores: make parts of them into offices.

The retailer is joining other chains including Sears Holdings Corp.and Macy’s Inc. that have carved off sections of their stores to other companies in an effort to improve store productivity and to give shoppers, increasingly tempted to buy online, another reason to stop by.

On Monday, Staples is expected to unveil a partnership with office-sharing startup Workbar LLC to open communal workspace at three Boston-area stores. Workbar is one of several firms that have emerged in recent years that manage a network of locations with desks and conference rooms that subscribers can access for a monthly fee.

For Staples, which has had declining shopper traffic since 2009, and four years of shrinking revenue, the hope is the arrangement with Workbar will draw small-business owners and mobile professionals who will then shop for office supplies.

“Obviously, it drives traffic for us,” said Peter Scala, Staples head of merchandising. “Our goal here is to continually focus on making large stores more productive.

The Staples arrangement is a response to a space glut among some retailers due in part to rapid expansion over the past several decades. Magnifying the situation is the rise of online shopping that has reduced the number of visits shoppers make to physical stores.

U.S. store visits in November and December fell 6.4%, according to RetailMetrix, which collects data through analytics software provided to retailers.

While Staples, Sears and other chains have been closing dozens of locations, they are opting to revamp some locations rather than close their doors.

Sears has said the strategy “will turn unprofitable or unproductive space into profitable space,” according to a 2014 blog post by the retailer. Many of the stores with subleased space are now part ofSeritage Growth Properties, a real-estate investment trust that Sears created last year.

Macy’s is exploring options to extract value from its 870 stores. In one deal announced in October, Macy’s sold the top four floors of its downtown Seattle store to an affiliate of Starwood Capital Group, which will convert them to offices. Macy’s will continue to operate its department store on the five lower levels.

“Most big box retailers have realized they can’t grow stores any bigger and get more business from them,” said Paco Underhill,founder of Envirosell, an international retail consultant.

Staples’ 1,300 U.S. stores face a particular space surplus as digital workplaces have sapped demand for binders and filing cabinets that used to fill the cavernous stores. Laptop computers and high-end stationery take up less shelf space than many of the formerly popular products that used to drive the retailer’s business.

The planned Workbar offices will take up 2,500 to 3,500 square feet inside the Staples store. Stores typically take up more than 20,000 square feet. Mr. Scala declined to say whether the office operator will pay for the space through rent, commissions or other means. The program is initially planned for the Boston area where Workbar is based.

The office supplier has eliminated more than 5 million square feet of store space over the past four years by closing or splitting stores. It plans to close another 50 stores this year in addition to downsizing and relocating others. The retailer is also defending a $6.3 billion takeover of rival Office Depot Inc. against government officials who have challenged the deal on antitrust grounds.

Most co-working companies set up shop in urban areas to cater to the clusters of startup companies and freelance workers in big cities, but Workbar Chief Executive Bill Jacobson said the Staples partnership was part of an effort to better serve the suburbs. The privately held company runs four workplaces in the Boston area along with 10 other offices shared with partners.

The new outlets will open in three Staples locations, including the first store Staples opened in 1986 in Brighton, Mass., on Boston’s western edge. Mr. Jacobson said the locations stay open long hours and on the weekends—and have plenty of parking.