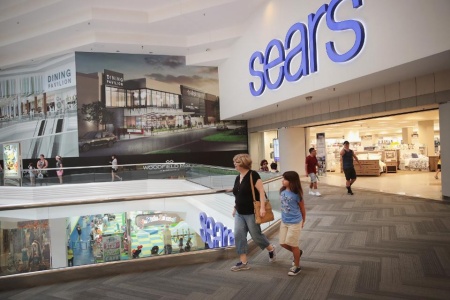 The department store chain announced Wednesday at its annual shareholders meeting in Hoffman Estates, Illinois, that it will offer full-service tire installation for orders from all tire brands on Amazon, including its own DieHard.

News of the partnership sent Sears’ stock soaring as much as 22 percent in early trading. The shares were last up 24 percent.

The rollout will begin in the coming weeks for those customers who live within range of 47 Sears Auto Centers in eight metropolitan areas: Atlanta, Chicago, Dallas, Los Angeles, Miami, New York, San Francisco and Washington, D.C. The service will eventually go live at Sears’ more than 400 Auto Centers across the U.S., to reach more of Amazon’s customers.

Sears kicked off its relationship with Amazon last summer when it announced it would begin selling Kenmore-branded appliances on Amazon, some of which are integrated with Amazon’s Alexa platform. Shares of the department store chain had surged more than 25 percent on the news.

Then, in December, Sears said it would begin selling merchandise from its DieHard brand on Amazon, including car batteries and now tires.

“Kenmore is now distributed nationally on Amazon with over 250 products and we are exceeding customer service level expectations,” Tom Park, president of Kenmore, Craftsman and DieHard brands at Sears Holdings, said in a statement.

The company said it has about 2,100 technicians at its Auto Centers across the country to perform tire installations.

Sears is meanwhile looking for ways to monetize other assets, as its sales are in a steep decline overall and the company has more than $1 billion of debt coming due within the year, according to financial statements.

Sears CEO Eddie Lampert‘s hedge fund, ESL Investments, has made a proposal to buy Kenmore, Sears’ home improvement business, its PartsDirect division and some of the chain’s real estate. Lampert has said he’s been shopping some of those assets for years, but hasn’t been able to find a serious buyer.

In a blog post Wednesday, prior to Sears’ shareholders meeting, Lampert said: “We’re still not where we need to be, and Sears continues to face significant challenges in a tough retail environment. … The reality is transformation is an ongoing process and we are not done. I still firmly believe that, together, we can transform this company.”

Sears Holdings shares are down nearly 70 percent from a year ago.

Burberry may implement fur-ban, thanks to Meghan Markle