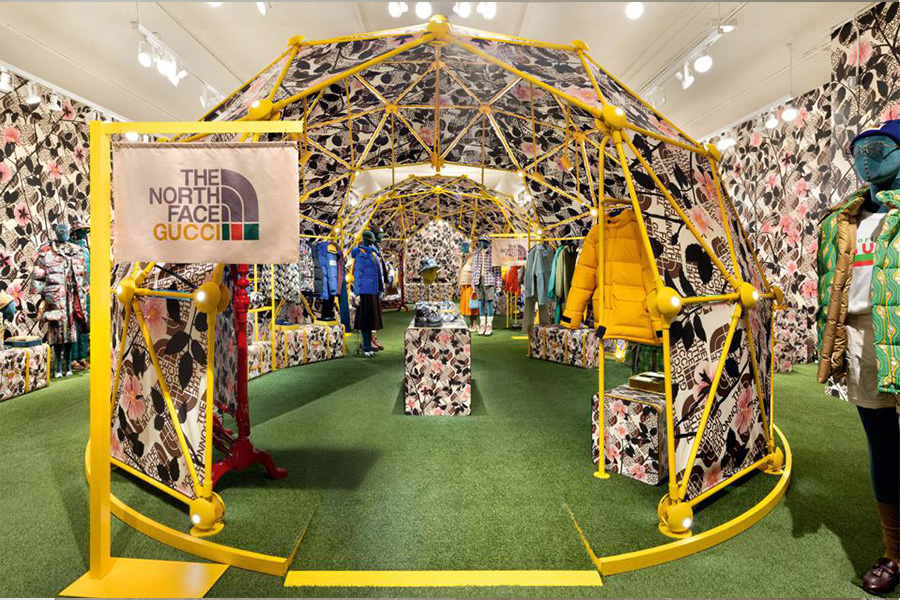 Gucci Pins: The North Face x Gucci opened up its pop up shops in North America on January 6, 2021. Locations from the east to the west coast hosted the capsule collection for the high-fashion explorer in you. Pop-ups appeared in San Francisco, Los Angeles, Chicago, Brooklyn, and Holt Renfrew Toronto, taken over by The North Face and Gucci’s collaborative designs and retail aesthetic. 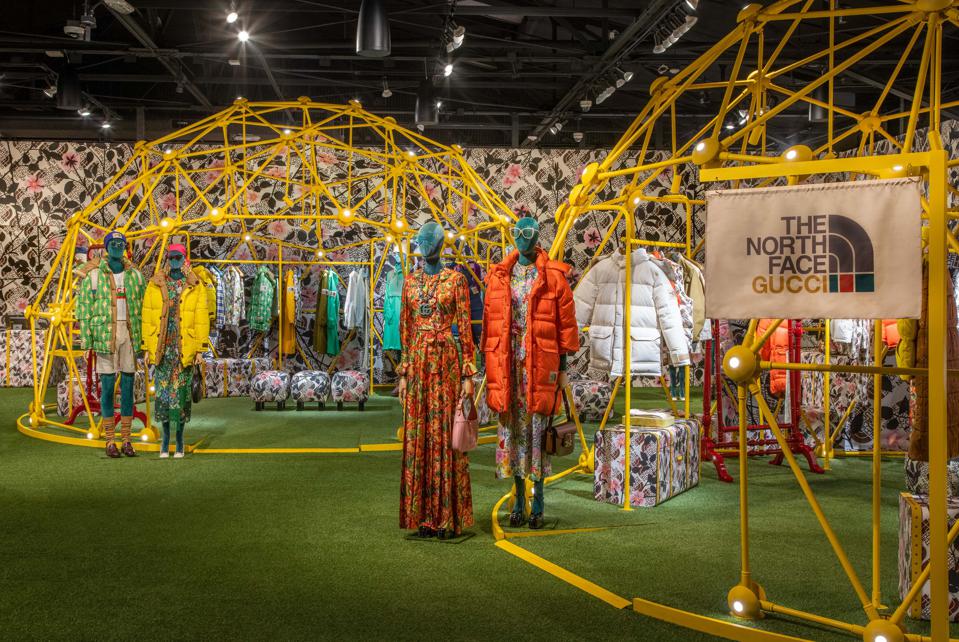 Though the North Face and Gucci have two separate customer-bases, David Whetstone, The North Face Design Manager Global Collaborations, Archives, and Special Projects, claims this project opens the doors to exploration through fashion style and physical expedition. Whetstone says in the Gucci Pins short documentary, “the goal is to expose people from the other set to a new idea and a new – way of thinking.”

Retail exploration is something we are familiar with as consumers, and what Gucci and North Face have provided in tandem is the ability to discover fashion in the ways we discover our world. After almost a year of worldwide lockdowns, the Gucci Pins capsule campaign draws customers to physical spaces, safely, to experience nature just outside our doorsteps and the feeling of finding something special along the way. The North Face x Gucci collaboration invigorates the retail business to where it was pre-pandemic. 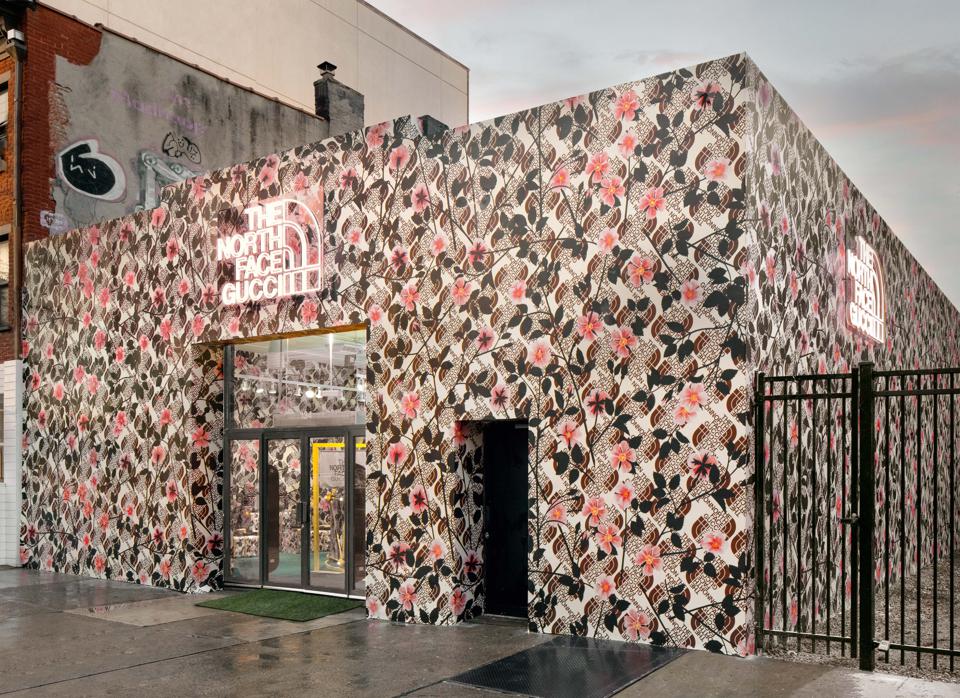 Far from the hype, this collaboration is a conscious approach to the new normalcy of living. Drops happen, and those who know, know. While the savagery of “hype-beasting” is subsided by mature and educated consumption. Gucci has always been keen on the temperature of fashion culture and has capitalized with innovative retail sense.

Inside each pop-up location, the North Face x Gucci design consumes shoppers from outside the stores. Logos and prints covered the full facade of The North Face Brooklyn store, for example. Inside, the same, in addition to the capsule items that never stay in the same place. Shoppers hoarded items they would likely purchase, and the hired Gucci staff relentlessly altered mannequins and tabletop displays as items were selling out throughout the day.

Inspired by the forces of nature, the structural concept of the stores conveys an outdoor trail. Shoppers experienced a star-lit effect inside the dome-shaped tents for men and women item selections. Slight hills, a turf rug for a sense of grass, and the limited edition dome-shaped tent are on full display among the fashion and accessories. Customers would find themselves among the terrain of the retail wilderness that Gucci and The North Face created.

As shoppers perused the store with personal retail handlers, they were also encouraged to engage with the environment. A bespoke entertainment experience further immerses the senses in a path of adventure and memories. A QR code brings the sounds of nature into the shopping space and experience through 8D audio technology. 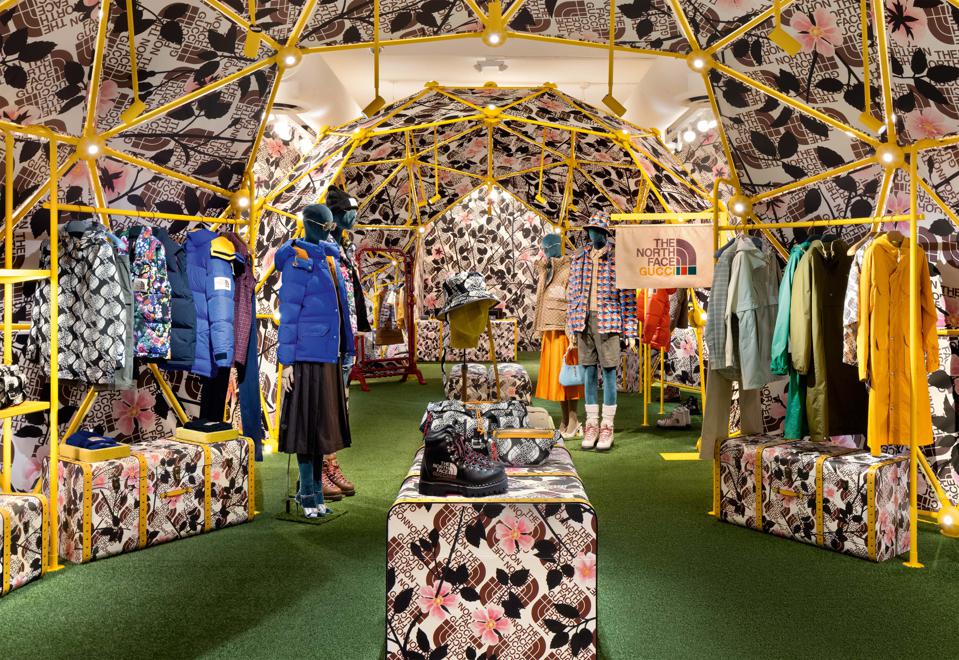 The Gucci Pins experience is also a dedicated Gucci PokeStops. A partnership with augmented reality company, Niantic, has featured the Gucci Pins campaign within its Pokemon GO app, a virtual space that promotes users to explore their outdoors. The Gucci feature includes three digitally wearable items from the collection, available to players who visit the Gucci PokeStops. The stops include physical locations of Gucci Pins, ArtWalls, and selected Gucci stores. 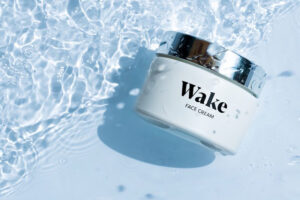 The beauty industry is starting to bet on bitcoin 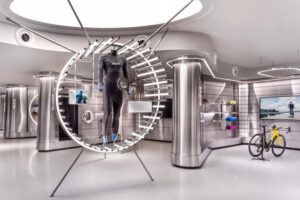 Take a Look Inside The Post-Pandemic Store 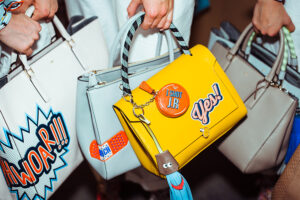