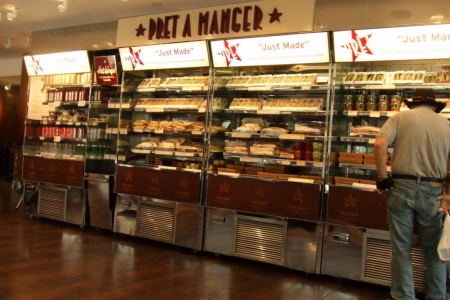 JAB Holding Company, the deal-hungry conglomerate, has bought dozens of coffee brands and begun branching out to doughnuts. Now, it has set its sights on sandwiches.

The company said on Tuesday that it would buy a controlling stake of Pret A Manger, the British sandwich chain that is a mainstay of London office workers, from an investment firm to expand its food-and-beverage empire.

With the deal, JAB has taken another step in becoming a force in the food world. Since 2012, the company — backed by Germany’s wealthy and secretive Reimann family — has spent tens of billions of dollars to assemble a huge portfolio of eating and drinking brands. (The conglomerate also owns the cosmetics maker Coty, as well as stakes in the household goods giant Reckitt Benckiser and the fashion label Bally.)

It began with coffee, as JAB sought to challenge the industry heavyweight Nestlé. JAB made deals for Peet’s Coffee, Caribou Coffee, Stumptown and more.

Then came restaurants like Krispy Kreme and the fast-casual chain Panera. And this year, JAB helped Keurig Green Mountain, which the conglomerate bought and combined with Mondelez’s former coffee arm, move into soft drinks with an $18.7 billion deal for Dr Pepper Snapple.

Now it has agreed to buy Pret A Manger, the 32-year-old chain — known to its mainstay customers as “Pret” — that makes its sandwiches and salads fresh every day. (It also sells organic coffee.) From a single shop in London, it has grown to 530 locations around the world, including in China, France, the Netherlands, Singapore and the United States.

You have 4 free articles remaining.

Since 2008, the chain has been controlled by the investment firm Bridgepoint Advisers. Last year, Bridgepoint reportedly considered taking Pret to the stock markets through an initial public offering — but ultimately decided to sell the company outright.

Pret said in a news release on Tuesday that it had £879 million, or $1.17 billion, in annual revenue. The company added that 2017 representing its ninth consecutive year of like-for-like sales growth.