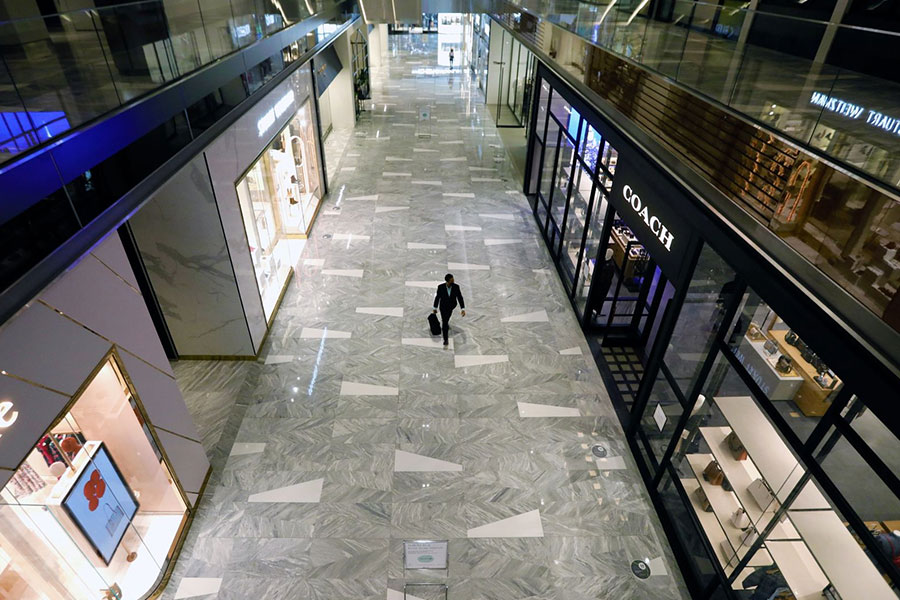 After six interminable months, the shopping mecca at the heart of Manhattan’s newest, big-money real-estate development is open for business.

It was meant to be a grand reopening, heralding the return of the gleaming, seven-story shopping hub at the heart of Manhattan’s newest, big-moneyreal estate development.

Yet on Wednesday at 11 a.m., after six interminable months, the doors of Hudson Yards mall opened to little fanfare and even fewer shoppers.
While most stores were open, foot traffic was scant during the opening hours. Zara and H&M remained closed as workers inside spent the day unfurling clothes from crates and hanging them on racks.

At Dylan’s Candy Bar, the iconic rows of self-serve candy were empty. Neiman Marcus, the mall’s anchor tenant, offered closeout sales of 50% to 70% on what little inventory it had on hand, a stark reminder of the retailer’s bankruptcy just 14 months after opening for the first time in New York City.

“It’s really sad. It feels quite scary when you walk along and you see no one in the stores,” said Jules Tiller, one of the few who came on the morning of Day One to do some back-to-school shopping.
Tiller, who lives in the West Village, said she and her daughter, Missy, were regulars before the coronavirus ripped through the city. They came to Hudson Yards three times a week. On Wednesday, she brought her Cockapoo Molly as well, while Missy rode a Razor scooter across the mall’s empty marble floors.
Nearby, workers were still putting the finishing touches on their shops — cleaning glass, wheeling out the requisite hand sanitizers and arranging clothes in perfectly manicured silk and cotton stacks in preparation for the smattering of people who braved the virus and showed up to shop in person. (Curbside pickup has been available since June.)

According to a statement from Related Cos., which developed Hudson Yards and is owned by billionaire real-estate mogul Stephen Ross, roughly 10,000 people visited on opening day. Spokesman Jon Weinstein said he expects traffic to increase heading into the weekend as awareness grows.
The mall reopening also brings back hundreds of jobs, he said, noting that retailers were “very happy to see the public’s strong response to the safe reopening.”
And while some stores, like Neiman, are on their way out, two new stores opened on Wednesday — jewelry store Marli and a Sunglass Hut. A new Levi’s is opening there next week, too.
Nevertheless, the scene was a far cry from its grand opening in March 2019, when celebrities, Instagram influencers and even a politician or two flocked to its opening night bash.

Whether life returns to Hudson Yards could help determine how quickly New York City recovers from the economic fallout of the pandemic, and crucially, how it re-imagines itself post-Covid. Even before the coronavirus struck, some questioned whether the city really needed yet another cookie-cutter shopping and real-estate development catering primarily to the 1%.
(Coincidentally, on the day of its reopening, Bloomberg News reported that Barclays Plc is exploring moving its U.S. headquarters to the office complex at Hudson Yards.)
On the ground floor, luxury jewelry maker Cartier nixed browsing entirely. Shoppers without appointments were asked to wait in line — even though there wasn’t anyone inside an hour after opening. A little before noon, there was only one woman standing in line.

Some visitors hadn’t even come to shop.
Rachel Hersey and Alyssa Triunfo, self-described content creators in their twenties, were taking photos of each other in front of the massive, empty reflective escalator. The women had been hoping to take pictures at the photogenic Vessel — rechristened the Giant Shawarma by New Yorkers — and were delighted to see the mall devoid of tourists, a plus for photography.

“I didn’t even know it was the grand reopening today,” said Hersey, sipping on an oat-milk matcha latte.