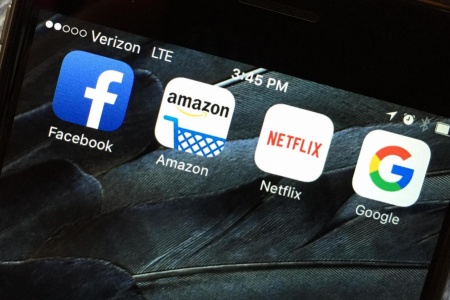 Powered by big gains in popular technology companies such as Apple, Amazon and Netflix, the Nasdaq composite barreled through the 8,000 milestone for the first time Monday and closed at an all-time high.

The surge is the latest sign that the longest bull market in Wall Street history remains healthy and continues to be driven by innovative tech companies that are transforming the way people communicate, shop and consume media.

The Nasdaq, which is up 16.1 percent this year after surging 28.2 percent in 2017, is led by the “FAANG” stocks – Facebook, Apple, Amazon, Netflix and Google parent Alphabet – which are responsible for a big chunk of the tech-dominated index’s sizable gains.

The stock market got an added boost Monday from an easing of trade tensions as the United States and Mexico announced that they have come to a new bilateral trade agreement.

The FAANG stocks have been among the biggest gainers in the record-long bull market, which has now lasted 3,548 days.

Since the start of the bull run on March 9, 2009, Netflix shares have risen more than 5,600 percent, Amazon has rallied more than 3,000 percent and Apple has gained more than 1,700 percent, according to data from S&P Dow Jones Indices.

Tech stocks are being driven higher by investors because of strong profitability. The information technology sector of the Standard & Poor’s 500 stock index, for example, posted profit growth of more than 26 percent in the second quarter, with more than 90 percent of the companies topping Wall Street forecasts.

It’s not only the Nasdaq, or FAANG, that’s hitting new highs. In a sign of the market’s broad advance, other stock indexes, including those such as the Value Line Geometric Index, where each stock has an equal weighting in the index’s fortunes, also hit fresh highs.

The stock market is revving back up after hitting a fresh all-time high last week after going six months trading below its prior January peak.

Nestle to Take on 500 Starbucks Employees in Coffee Alliance