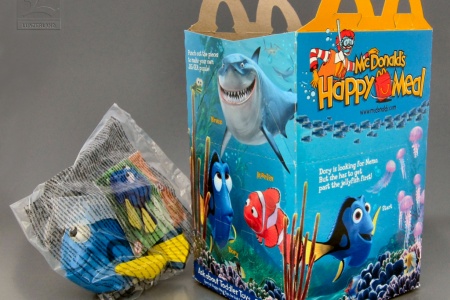 McDonald’s and Disney have reunited in a deal that will bring Disney movie toys back to Happy Meals for the first time since 2006 and gives both megabrands new ways to market to families over the next few years.

The agreement helps McDonald’s as it looks for new ways to increase the massive business it does with families, who already make up 25 percent of all visits to its U.S. restaurants, and gives Disney a big way to reach millions of potential moviegoers.

McDonald’s hadn’t been able to promote any Walt Disney Co. movie in its Happy Meals since 2006. That’s when Disney opted not to renew a 10-year pact, in part because Happy Meals didn’t meet Disney’s then-new nutrition guidelines. McDonald’s has made several changes since then, including ones announced earlier this month, which mean its Happy Meals are about to become compliant with Disney’s food criteria.

Fittingly, as the collaboration is a sequel to an earlier pact, it kicks off with two sequels: “Incredibles 2,” which opens June 15, followed by “Ralph Breaks the Internet: Wreck-It Ralph 2,” due Nov. 21.

Clearly, both companies have changed a bit since 2006, when the final Disney Happy Meals included toys tied to a DVD release of 1989’s “The Little Mermaid.”

McDonald’s is busy trying to modernize the look of its restaurants; the outreach it does to diners through its app, commercials and other marketing; and its food, which now includes “artisan” buns, for example, and will soon feature some fresh beef burgers nationwide. And Disney has steadily updated its portfolio, including through the acquisitions of Marvel and Lucasfilm. Both corporate giants, like their rivals, also want to ensure that they market themselves properly and wisely to families, who are paying ever-closer attention to what their kids consume.

“It is important for us to stay in front of consumers and keep them excited about the different properties that we’re launching at any given time,” says Tiffany Rende, senior VP of corporate alliances at The Walt Disney Co. “McDonald’s has obviously huge scale [and] great reach for our audiences.”

Neither Flatley nor Rende would share details on the first rounds of toys set to debut this year. But they say they’re working on ways to promote movies that will differ from past Happy Meals executions. Those plans include space on McDonald’s digital menu boards and within the McDonald’s app, as well as through Happy Meal packaging and products.