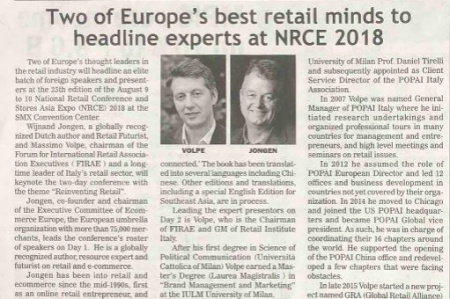 Massimo Volpe, General Director of Retail Institute Italy, will be a speaker at the NRCE 2018 Retail Conference and will take part in The Global State Of Retailing session. A two-day conference, 9-10 august in Pasay City, with speeches by industry speakers from all over the world who will share experiences and advice on different topics on the retail sector.

In 2007 he was appointed General Manager of POPAI Italy. As G.M. he has developed research activities, organized professional tours in many countries for management and entrepreneurs, and high level meetings and seminars on retail issues. In 2012 he stepped in to the role of European Director and led 12 offices and business development in countries not yet covered by the POPAI organization. In 2014 he moved to Chicago and joined the HQ of POPAI becoming VP of POPAI Global, in charge of the coordination of the 16 chapters around the world. He supported the opening of the POPAI China office and the redeveloped a few chapters that were facing obstacles. In late 2015 he started a new project named GRA (Global Retail Alliance) and became Chairman of FIRAE (Forum for International Retail Associations), a network of 45 associations of retailers from 20 different countries.