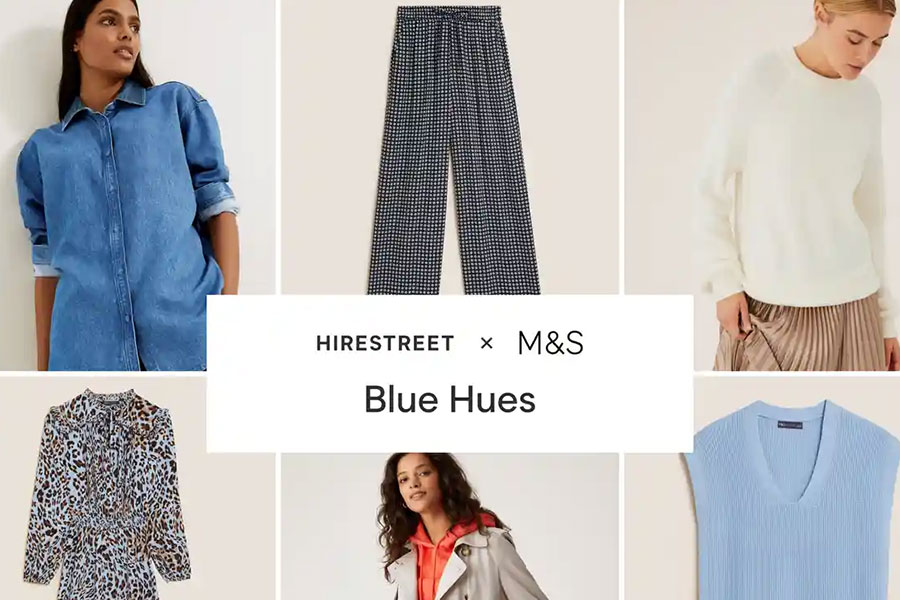 Marks & Spencer is to begin hiring out capsule wardrobes of 10 different outfits for up to a month, promising a more environmentally friendly and economical way for shoppers to regularly change their look.

The five-, six- or seven-piece womenswear collections – with names such as Comfy Cool, which includes faux leather leggings, a hoodie and baseball cap, and Monochrome Moments, featuring a black-and-white print dress and black padded gilet – can be rented via the specialist site Hirestreet from £39 a capsule for five days.

A total of 78 womenswear items, including jeans, footwear and accessories, would be included in the scheme.

M&S said it was extending its partnership with Hirestreet, through which it first began renting out individual items a year ago, as a third of its shoppers said they wanted to change how they bought clothes due to concerns over climate change.

The fashion industry has been found to contribute more to climate change than the aeronautical and shipping industries combined. If current trends in shopping continue, it could account for a quarter of the world’s carbon budget by 2050.

One in 10 under-35s have opted to try rental services as part of that shift, and one in 20 of all consumers.

Some questions have been raised over whether renting is greener – with one study suggesting it could be worse for the environment than throwing items away. However, that study assumed bought items were worn 200 times before being disposed of, when some items of fast fashion are worn just once or twice.

Richard Price, the managing director of clothing and home at M&S, said: “This season it’s not just about what we offer but how – this is just one of the ways we’re working to support customers as they expect to lower their carbon footprint.”

M&S has joined retailers from Selfridges to Primark in experimenting with ways to reduce the climate impact of fashion retailing as consumers turn to secondhand items or cut back on spending amid mounting awareness of the environmental cost.

Spending on fashion is also under pressure from economic concerns as the cost of living crisis inflates energy and food bills, leaving households with less to spend on discretionary items.

The secondhand clothing market is expected to grow faster than fast fashion in the next few years as the rise of Depop, Vinted and Facebook marketplace make it easier to trade unwanted items.

Renting clothes – made popular by the likes of Carrie Johnson, the former prime minister’s wife, who hired her wedding dress, and the TV presenter Holly Willoughby – can also work out much cheaper if only worn for a special occasion. A black leather M&S dress, for example, is available for £35 for four days compared with its £250 sale price.

M&S also enables the hire and resale of children’s clothing via a partnership with Dotte and launched a clothing recycling partnership with Oxfam in 2008 that four years later turned into its Shwopping scheme, which encourages customers to hand over an old item of clothing when they buy a new one.

As you’re joining us today from Italy, we have a small favour to ask.

There can be no more hiding, and no more denying. Global heating is supercharging extreme weather at an astonishing speed. Guardian analysis recently revealed how human-caused climate breakdown is accelerating the toll of extreme weather across the planet. People across the world are losing their lives and livelihoods due to more deadly and more frequent heatwaves, floods, wildfires and droughts triggered by the climate crisis.

At the Guardian, we will not stop giving this life-altering issue the urgency and attention it demands. We have a huge global team of climate writers around the world and have recently appointed an extreme weather correspondent.

Our editorial independence means we are free to write and publish journalism which prioritises the crisis. We can highlight the climate policy successes and failings of those who lead us in these challenging times. We have no shareholders and no billionaire owner, just the determination and passion to deliver high-impact global reporting, free from commercial or political influence.

And we provide all this for free, for everyone to read. We do this because we believe in information equality. Greater numbers of people can keep track of the global events shaping our world, understand their impact on people and communities, and become inspired to take meaningful action. Millions can benefit from open access to quality, truthful news, regardless of their ability to pay for it.