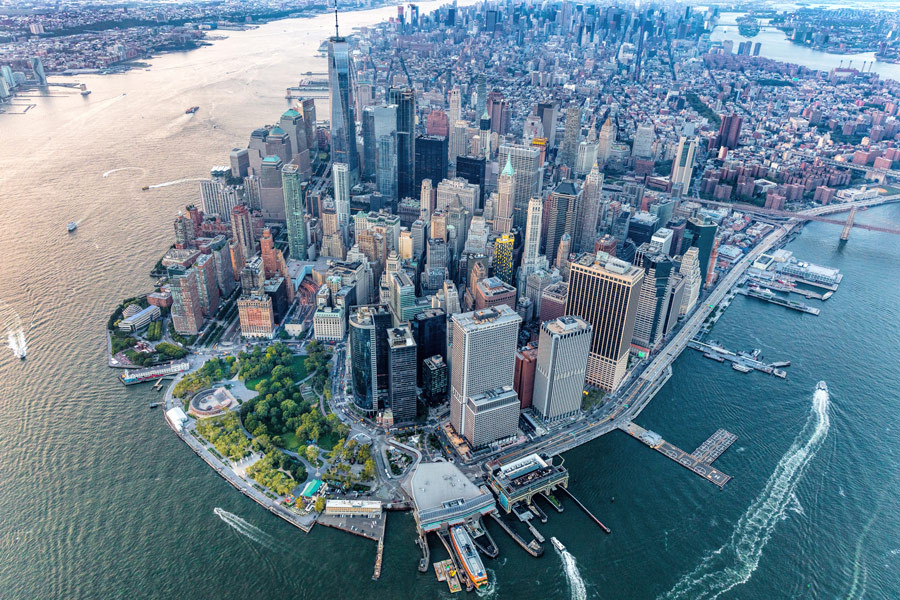 Manhattan is undergoing an unprecedented shift in its shopping scene.

Gone are the gargantuan Lord & Taylor and the Henri Bendel flagship and the Saks Fifth Avenue women’s store downtown. New arrivals are Neiman Marcus and Nordstrom.

Shakeups of this magnitude are a rarity in a market where stores can stay open for more than 100 years, through every downturn and depression.

The turnover underscores the extent of the duress that the retail industry is going through in the age of Amazon. On a net basis, the city will lose about 340,000 square feet of department stores this year—the equivalent of two Walmart Supercenters. At the same time, it highlights the enduring lure of Manhattan, the nation’s most prestigious place to sell fashion and luxury goods. When Nordstrom opens its mega-store in a skyscraper overlooking Central Park in October, it will be the biggest new retail space the city has seen in over half a century.

“Manhattan does not need another department store,” said Jamie Nordstrom, president of Nordstrom stores. “But we think they need a Nordstrom.”

For U.S. retailers, New York has long been a place to situate the crown jewel of their store networks, like Paris or London for their European counterparts. There are around 30 department stores on the island, ranging from discount shop TJ Maxx to luxury emporium Bergdorf Goodman, each vying for New York’s 8.6 million residents and the 65 million tourists who visit each year. Their selling floors take up a lot of space, nearly 6 million square feet in all, about the size of 100 football fields.

The flagship stores are usually much larger than their suburban brethren found in shopping malls across the country, since they count on both locals and out-of-town visitors to provide enough foot traffic to justify their size. Some are so big that a single store can have an enormous impact on its company’s performance. The 815,000 square-foot Bloomingdale’s on 59th Street occupies a whole city block and accounts for 18% to 20% of the retailer’s annual global sales, according to a 2018 report in Women’s Wear Daily.

The granddaddy of all the flagships is Macy’s Herald Square. Though it’s less luxurious than its glitzy Fifth Avenue competitors, Macy’s dwarfs its rivals. At 2.5 million square feet, with much of that devoted to retail space, the building is 17 times larger than the J.C. Penney in a mall across the street. Macy’s has been there since 1902, and was among the first buildings to be outfitted with a modern escalator. It was also the first in the city to hold a liquor license after Prohibition ended in 1933, and continues to be critical to the company.

“Herald Square is our most productive and our most important brick-and-mortar asset in the entire chain,” Jeff Gennette, chief executive officer of Macy’s, said in an interview. “Every inch of it is highly productive. From the main floor all the way up to the top ninth floor.”

Retail is helping redraw the city’s skyline as well. Macy’s is considering adding a skyscraper atop its shopping space and executives have met with local officials over the past several months to get their input. The new Neiman Marcus is inside the 750,000-square-foot Hudson Yards mall on Manhattan’s sleepy west side. Nordstrom’s store will be on the bottom levels of a 95-floor tower, billed as the tallest residential building in the world.

Meanwhile, existing stores have invested more than $500 million to revamp their Manhattan locations. Bergdorf Goodman has unveiled parts of its five-year revival plan, such as a new first floor and jewelry salon in its historic building. Bloomingdale’s is redesigning three fashion floors, the cosmetics department and the shoe area in its own multi-year renovation project. Saks Fifth Avenue is nearing the completion of a $250 million renewal, including a totally redone main floor that’s meant to be a handbag shopper’s paradise.

This shows the newcomers are entering a cutthroat—and expensive—arena. They’ve collectively bet billions that they can win.

For Nordstrom, Manhattan represents a “long-term quest” that’s been in the works for more than 25 years, said Jamie Nordstrom. He said he scoped out space on the island with his father as far back as the mid-90s. The 118-year-old company landed on a plot near Columbus Circle and owns the building, a sign that they expect to stay for some time.

When shoppers walk into the store, they’ll see items they haven’t seen before, he added. The store will have high ceilings and lots of natural light, and will focus on apparel for women and kids. Men can walk across the street to their own store that opened last April. Nordstrom said his company’s big bet on Manhattan is backed up by the fact that the borough has been the retailer’s largest online market in the past couple of years.

Convenience will be key to Nordstrom’s strategy, with plenty of services for commuters, such as tailoring and delivery options. Restaurants and specialty coffee shops are staples throughout other Nordstrom stores from Seattle to Arlington, Va., but the Manhattan location will take those offerings to the next level.

Neiman Marcus says even before it had a store in New York, it raked in about $100 million of sales per year from the city’s inhabitants and $200 million from the metropolitan area. In April, executives said the store was seeing more traffic than expected.

“It’s a very big moment,” said Geoffroy van Raemdonck, CEO of Neiman Marcus Group Ltd., in an interview. “Emotionally, I think we look at it as a very big opening.”

At Hudson Yards, Neiman Marcus is surrounded by stores such as Sephora, Cartier and Dior. The 188,000 square foot shop is filled with shoes, personal shoppers, a beauty salon, a restaurant, bar and arcade games. Van Raemdonck calls it “retail theater.” His strategy shows how companies are calculating that they have to provide a large store packed with merchandise and amenities to lure Manhattan shoppers.

Even as excitement builds for the new entrants, reminders of what could go wrong can be seen just a few streets over. On Fifth Avenue, Lord & Taylor sold its 11-floor building to WeWork and shuttered its flagship store for good in January. Signs reading “We’ll miss you Fifth Avenue” could be seen behind the glass doors. Just down the street, Henri Bendel closed its flagship (and all of its remaining shops) that same month when parent company L Brands shut down its operations. The newbies know running a department store in this environment isn’t easy.

“We’re not coming to plant the flag in New York and say we’re going to have a big store,’’ van Raemdonck said. “We’re going to New York to mature the customer relationship we have with the New Yorkers.’’