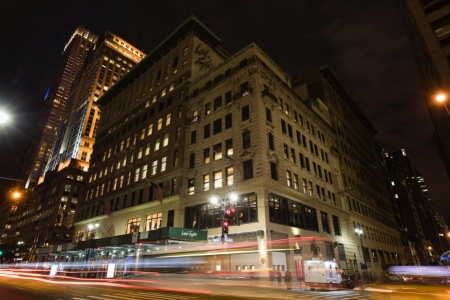 From the moment its doors opened more than a century ago, the Lord & Taylor building on Fifth Avenue in Manhattan has stood as a monument to old-school retail.

Complete with a grand entrance arch and copper cornice, the 676,000-square-foot store is a temple of urban commerce — and was named a New York City landmark a decade ago.

But now, the forces buffeting the retail industry are diminishing Lord & Taylor’s presence as a New York institution. The company that owns the department store chain, Hudson’s Bay, said Tuesday that it was selling off the flagship store to WeWork, a seven-year-old start-up whose office-sharing model is helping to reinvent the concept of work space.

Lord & Taylor will rent out about a quarter of the building, where it will operate a pared-down department store. WeWork will use the rest of the building for its global headquarters and to lease shared office space to its customers. The redesign is expected to come after Christmas of 2018.

In selling its Italian Renaissance-style building to a WeWork joint venture for $850 million, Lord & Taylor and Hudson’s Bay are acknowledging that even the grand physical shopping spaces of old are now worth more as office space cater

As Lord & Taylor struggles to find its footing in the e-commerce age, WeWork is capitalizing on the needs of the new economy. The company is offering flexibility and informality to a generation that is increasingly untethered to traditional offices. It allows workers like entrepreneurs or graphic designers to choose the size and style of the space they prefer, and to lease it for as long or short as they want. A motto on its website reads, “Make a life, not just a living.”

WeWork has expanded from two locations in New York City when it was founded in 2010 to more than 160 locations in 52 cities this year. It has pushed into increasingly prominent locations for its co-working spaces over the years — but nothing on the order of the Lord & Taylor building.

Across the United States, retailers are rethinking the uses of their physical spaces, as more shopping moves online. Many struggling malls have converted their stores into rock-climbing gyms, movie theaters and community colleges to try to attract customers. Other shopping centers stand mostly empty.

Over the past year, Macy’s has closed dozens of its department stores, though it has held on to its main property on 34th Street in Manhattan. And Hudson’s Bay, whose roots lie in real estate development, is well known for its creative use of financial engineering tied to the property it owns.

Still, selling off landmark properties comes with risks. Many old-line retailers have struggled to strike a balance between cashing out their valuable real estate holdings while retaining the historic buildings that define their brands. Despite the growth of e-commerce, the vast majority of shopping is still done in stores.

Founded by the English merchant Samuel Lord in 1826, Lord & Taylor’s department store was once a favored retailer of high society. When its Fifth Avenue building opened in February 1914, it drew 75,000 visitors, who were treated to music from a pipe organ on the seventh floor and could choose to dine in one of three restaurants on the top floor.

The Christmas decorations in its street-level windows have long been a staple of the city’s holiday season, drawing many thousands of tourists and New Yorkers alike.

But when the company moved into the mass market, it lost much of its luster.

The company began to recover about a decade ago under Richard Baker, a veteran real estate investor. He led a 2006 takeover of the department store company, and used that as a springboard for further acquisitions, from the Canadian chain Hudson’s Bay to Saks and the e-commerce outlet Gilt Groupe. He put all the brands together under the umbrella of the Hudson’s Bay Company.

But as the tidal waves of e-commerce batter traditional retailers, Hudson’s Bay has seen its stock price fall by nearly a third over the past year. Retail sales at Hudson’s Bay were down about 1 percent in the first half of the year. As of Tuesday’s close, the company had a market capitalization of roughly $1.7 billion, or a tenth of WeWork’s private market valuation.

As its financial performance stagnated, Hudson’s Bay faced enormous pressure to sell its trove of real estate holdings — including its crown jewel, the Saks Fifth Avenue flagship store farther up Fifth Avenue. That property was appraised recently at about $3.7 billion.

One of Hudson’s Bay’s shareholders, the real estate investment firm Land and Buildings Investment Management, has pushed for the company to sell the Saks store, suggesting that it might be desirable to a hotel developer or as a brick-and-mortar space for the online giant Amazon.

Walmart aims to turn in-store holiday shopping into an event