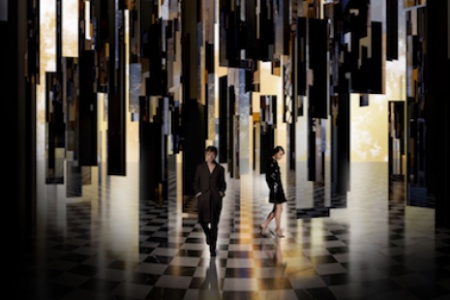 Launched in September, La Femme Prada and L’Homme Prada are presented to consumers as a “pair of equals” with the scent serving as an “olfactory map” for true femininity and masculinity.

Prada’s video for the La Femme et L’Homme Prada line was shot by photographer Steven Meisel and explores “the fluidity of identity.” The campaign stars actresses Mia Wasikowska and Mia Goth as well as actors Ansel Elgort and Dane DeHaan.

Scenes show the four actors walking through a stark black background marked with doorways. The cast walks in and out of the doors, and upon doing so are no longer the same individual who walked through the doorway to begin with.

To accompany the video campaign Prada has developed an interactive digital journey that relies on virtual reality technology. Consumers are encouraged to download the PRADAxPRADA mobile app to begin the experience.

Upon launch, the PRADAxPRADA app transports users into the world of La Femme and L’Homme Prada. Users have the option to experience the app using a cardboard virtual reality headset or to continue with only their mobile device.

PRADAxPRADA takes users through four different three-dimensional routes, set up as chapters, that can be navigated as the consumer sees fit. By developing its virtual reality content with “choose your own adventure” functionality, Prada allows users to individualize their experience and interaction with its brand.

The experience includes four chapters: Innerspace, Olfactory Chimera, Multiplicity and Alter Echoes. Through exploration of icons consumers unlock textures, scenes, sounds and the multi-faceted nature of the fragrance, its ingredients, bottles and packaging.

PRADAxPRADA is available on the brand’s Web site as well as the Oculus, Apple and Google Play app stores.

Virtual reality is being hailed as brands’ next lucrative storytelling medium.

As marketers begin to expand their storytelling initiatives beyond social media platforms, virtual reality will become more influential in advertising, although only certain sectors will make it a priority.

With major brands including Coca-Cola and McDonald’s trying their hand at virtual reality in a bid to connect with younger consumers and leverage mobile in innovative ways, companies are sitting up and taking notice. Although the technology may not be well-suited to every brand, executives in the food, retail, automotive and hospitality industries could hit a marketing home run by taking advantage of inexpensive cardboard packaging and mobile apps to create a memorable augmented viewing experience (see story).

The abstract nature of fragrance marketing may find opportunity in virtual reality as the technology will bring a scent to life in a more immersive way than standard film.

For example, French fashion label Jean Paul Gaultier provided a new perspective on the olfactory composition of two of its fragrances through a virtual reality experience.

For the launch of Classique and Le Male Essence de Parfum, the brand is allowing consumers to take on the point of view of a single drop of fragrance in 360-degree films. As virtual reality is becoming more prevalent, beauty marketers are finding ways to leverage the technology to better immerse consumers in a scent world