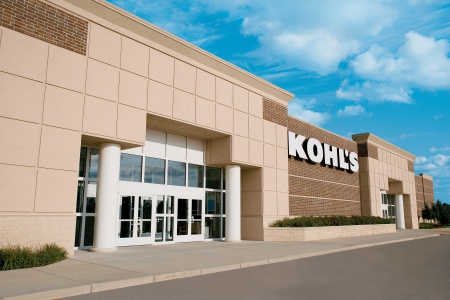 Many rival department stores shutter locations and Amazon continues to grow and divert sales from brick-and-mortar stores to online. But Kohl’s isn’t following suit. The department store has 500 more locations than Macy’s, and it’s leaning into those 1,200 stores.

“We are not a mall store, we are an off-mall store. So, 95 percent of our stores are not in traditional malls,” CEO Mansell said. “As we move to an omnichannel world — and we’re there — we are looking to be one of the best-in-class omnichannel retailers.”

Beginning with the back-to-school shopping season, Kohl’s is hoping to pick up customers who used to shop at stores that have closed.

Kohl’s hasn’t been forced to close many of its own stores since most are “not stressed from a cash perspective,” Mansell said.

He also touted the company’s balance sheet, which has given it the flexibility to act on new initiatives and invest in technology. Over the last three years, Kohl’s has invested $2 billion in technology and $1 billion in its stores.

Still, the department store’s share price has been trading in a relatively narrow range in 2017, but only after dropping around 19 percent in response to Kohl’s holiday sales results the first week of January.

According to Mansell, the stock has been “beaten down because we’re part of this generalized brick-and-mortar department store retailing.”

Despite the investment Kohl’s has made, its comparable sales have fallen for five straight quarters. Women’s apparel and accessories make up around 40 percent of the total merchandise mix, but the retailer has seen sales of those categories struggle.

Like other department stores, private and proprietary labels are an important part of Kohl’s business. Sonoma, Croft & Barrow and Apt 9 are each billion-dollar private-label brands, available only at Kohl’s. The brands are especially important in women’s apparel, a category that has been struggling.

Mansell said the company is seeing improvement in the category as its attempts to source apparel more quickly is paying off. Since most of its apparel is private-label, it is able to quickly respond to trends it’s seeing at its stores.

Improving apparel sales is a big task. Government data shows apparel spending has fallen over time as spending has been diverted to other areas. Meanwhile, consumers are also flooded with more choices, competitive prices and new distribution options from fast fashion to online-only brands to department stores and more.

More than half of Kohl’s merchandise is national brands, or brands sold by multiple retailers and websites or from the brand direct to consumers. Under Armour launched in stores and online in March, Kohl’s biggest-ever brand launch. Mansell said the beginning weeks “exceeded expectations” without cannibalizing sales of competing Nike products, which saw a high-digit sales increase in the quarter.

But the competition from Amazon will only get more intense. New estimates from Consumer Intelligence Research Partners put Amazon’s U.S. Prime members at 85 million, and the online juggernaut has apparel squarely in its sights. Amazon has been expanding its own brands and recently announced a new Prime Wardrobe program that will ship members three or more clothing items or accessories and allow them to “try before they buy.”

Kohl’s says 80 percent of Americans live within 15 miles of a Kohl’s store and it counts 70 million of the country as consumers, saying “almost all” shop in stores.

Stores are a significant distribution point for Kohl’s sales that initiate online. In the most recent quarter, Kohl’s stores fulfilled 24 percent of the retailer’s sales. Buy online, pickup in store made up 13 percent of digital orders, up from 8 percent the year prior.

While fulfilling orders in whatever channel makes shoppers happy is important to investors, so too is the cost of doing business. Often in retail the cost of operating both store and online channels is expensive, making sales that cross over both business segments less profitable. But Kohl’s said it has kept the cost of store fulfillment nearly constant.

Is AI the Future of E-commerce Fraud Prevention?