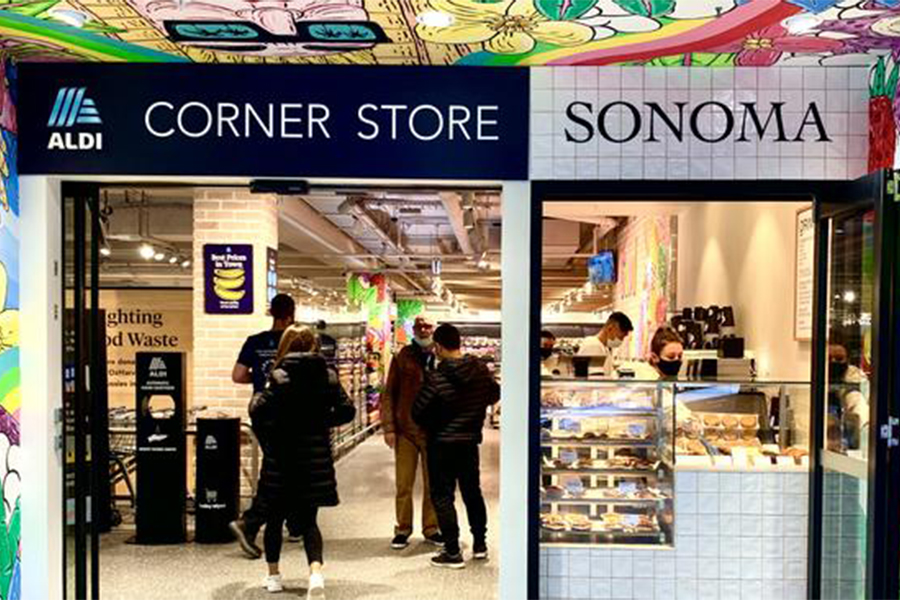 It’s the swanky and completely unique new-style Aldi that the supermarket giant doesn’t actually want you to go to. At least not yet anyway.

On Wednesday, in the middle of lockdown, Aldi Corner Store opened on Sydney’s north shore. The firm has called it a “first of its kind, new Aldi format” aimed at Australia’s “cosmopolitan shoppers”.

It’s a radical new look for the German firm designed less for the weekly shopper and more for the grab and goer. Corner Store is partly aiming at a lucrative market worth more than $4 billion that Aldi hasn’t tapped into yet.

It has products you won’t find in any other Aldi including a 99c must-have item that you can’t even pick up until you check out. But there are also some favourites missing.

Local Alison, swinging by for some essentials, told news.com.au it was a “more up-market” store and that Aldi had “upped its game”. But the debut of Aldi’s first foray out of the one-size-fits-all supermarket mould could not have come at a worse time. Not only is Sydney in a lockdown, but Aldi Corner Store is located in North Sydney, a business district now essentially deserted.

Aldi’s new store is all dressed up like the belle of the ball – but the ball got cancelled. In a statement, an Aldi spokeswoman urged curious shoppers to hold off coming.

“Given the lockdowns we don’t feel it’s appropriate to drive additional traffic to Corner Store at this time,” she said.

“We are open for trade and it’s our responsibility to ensure North Sydney locals have access to the reopened store to make their essential grocery purchases”.

Grab a coffee and a danish on the way in. Picture: Benedict BrookSource:Supplied

Unlike any other Aldi

But when the lockdown is over, and if you choose to go an Aldi adventure, you’ll find a store unlike any other. How many Aldis have a coffee shop at the entrance? Let alone one from Sydney artisan bakers Sonoma. There’s also no barrier gates to pass through as you are drawn in by glistening fruit and veg and a range of food to go items. Mueslis and yoghurts and fancy cheeses are the first temptation. Then there’s sushi, sandwiches, salads and poke bowls. Or you can grab a snack pack of apple slices, pretzels and caramel dipping sauce for an indulgent afternoon pick me up.

Many of these products have never been ranged in Aldi before and come with distinctive Corner Store packaging. A warmly lit nook features no less than 12 different types of sourdough, many made under Sonoma’s Wild Origins brand. A nearby Woolworths could manage only a mere nine sourdoughs. In another corner, customers can squeeze their own orange juice.

Self serve with a smile. Picture: Benedict BrookSource:Supplied

The walls are painted with an array of sassy fruits in the distinctive style of Sydney artist Joel Moore, aka Mulga. One of the most unique – and perhaps desirable – items at this store is an Aldi Corner Store reusable bag daubed with Mulga’s colourful fruit characters. Why not get a 99c work of art with your avocados?

What’s missing from the mini Aldi

The store has wine and beer. And yes, the special buys are there – Aldi would be foolish to ditch those. Active wear, camping equipment and hi-viz hoodies were all available.

But not a doll’s house and unisex bike which were in other stores this week. And that’s the most obvious omission from Corner Store. The big and bulky Aldi favourites.

If you’re searching for 7kg sacks of dog food, giant packs of cat litter or 10 litre containers of spring water, you may be left wanting. There’s just nowhere to put them.

A completely unscientific survey by news.com.au found the prices to be comparable to a standard Aldi or even a touch cheaper at Corner Store. The locals of North Sydney, with their harbour side views, can get a punnet of strawberries for $1.99 at Corner Store; the same product was $1 more expensive at a nearby Aldi. Similarly, a $10.99 pack of chicken breasts was $9.49 at Corner Store.

Alison, who lives nearby, said she came three times a week to the Aldi which previously stood where Corner Store now calls home. Despite a larger Coles being just a street away, she said she preferred Aldi’s organics and its “quirky” products.

“They’ve upped their game here. It feels more up-market with less stuff in ripped cardboard”. But she questioned why there was a coffee shop given North Sydney was full of them, many of which were family businesses going back years.

In two decades, Aldi has gone from a newcomer to Australia’s third largest supermarket with 12 per cent of the $122 billion industry. According to data firm IBISWorld, the convenience store market, which Corner Store is leaning towards, is worth a further $4.2 billion annually.

But Woolworths and Coles have already made inroads into that area with their Metro and Local brands respectively. Indeed, a Woolworths Metro is just a few minutes’ walk from Corner Store.

Speaking to The Australian today, Aldi Australia chief executive officer Tom Daunt admitted the firm was sometimes “late to the party” on innovation.

The new store, for instance, has self-serve check-outs – but is only the second Aldi to have them. “We would rather be a little bit late but arrive at a strategy that allows us to bring the very best offer to the customer.”

Mr Daunt said an initial test run of four Corner Stores was planned, each around half the size of a standard 1200 square metre Aldi.

“There will be some range changes, so some of the products that don’t typically really appeal to inner-city urban dwellers we have removed and that has given us space back and allowed us to squeeze a traditional Aldi store into a smaller format.”

QUT retail watcher Professor Gary Mortimer said it was a risky time to be opening smaller stores with Woolworths recently announcing the closure of a clutch of its Metro stores in CBDs where custom has plummeted due to the pandemic.

Nonetheless, it was a lucrative space. “Smaller format grocery stores make a lot of sense – they have lower running and leasing costs, quick to fit out and open, and fit easily into high streets,” he told news.com.au. “But while it makes sense to sit back and cherry pick the initiatives that work, the risk is that as you roll out your version, the market leaders have moved onto something else.”

While waiting for a Sonoma coffee, another local told news.com.au he didn’t like the previous store. It was “too industrial”, he said.

But he was impressed with the revamp. “This is a very welcoming store. All Aldis should all be like this”.