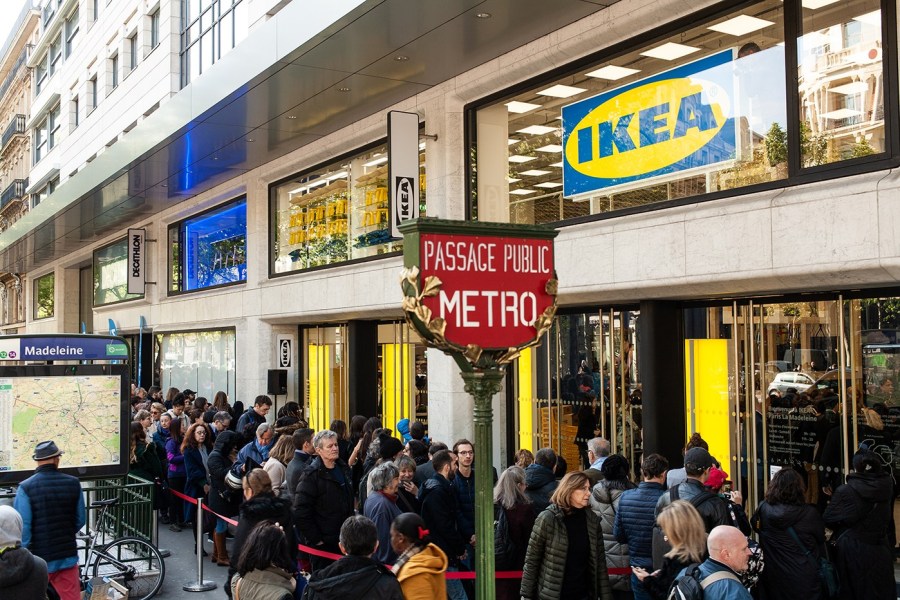 Ikea opened a new city-centre concept store in Paris as the Swedish furniture giant tries a new strategy for winning over urban consumers that will be rolled out internationally this year.

The Paris outlet at the Place Madeleine, a short walk from the bottom of the Champs-Elysees avenue, is four times smaller than Ikea’s typical blue-box megastores, which are traditionally located on cheaper land on the edge of cities.

“It’s a test laboratory. From the opening, we will start learning,” the chief executive of Ikea’s parent group, Jesper Brodin, told during the store’s inauguration.

“The idea is that the concept of La Madeleine will go to Milan, to New York, to Tokyo if we are successful,” Brodin said, adding that the next city-centre store is set to open in Moscow next month.

The company already has city-centre stores in Madrid and Stockholm, but they sell single product lines such as kitchens rather than the full range of items which is being offered in the Paris outlet.

“We are trying to reach the many people with thin wallets, normally with small spaces, and big dreams and big needs who live in the city centre,” Brodin said during an opening ceremony.

Ikea operates four stores in the suburbs surrounding Paris and offers a free bus service for Parisians living in central areas to reach them. But clients still need to get their purchases home, which for bigger items requires paying delivery costs that quickly add up, especially for same-day service.

“We have known for many years that there are many people living in the city centre of Paris who don’t have a car or don’t have enough time to interact with Ikea in the big shops, so this is a declaration of love to them,” Brodin added.

The first customers were showered with confetti and treated to a dance from staff as they entered the premises on Monday.

With its new stores, Ikea joins other major retailers hoping to tap into the growing number of urbanites who are loath to take taxis or public transport to stores outside the city limits. The trend “is to get closer to the consumer” with small-format replicas of bigger stores, said Emmanuel Le Roch of the Procos federation of specialised retailers.

The use of flat screens and other technology to show off an item’s multiple colours and models lets brands condense their offerings while still giving clients “genuine service, in terms of either delivery or advice,” Le Roch said.

For Ikea, the goal is to offset sluggish growth in the number of visits to its traditional stores, even as its online sales surge.