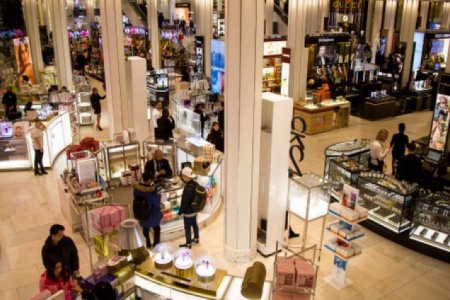 So much for wowing Wall Street with better than expected financial results.

Despite a shallower drop in second-quarter comparable sales, Macy’s (m) took a massive beating on Thursday on signs that the department store is still far from figuring its way out of the retail abyss it finds itself in.

While analysts will point to a number of items for the share drop – Macy’s had nothing new to report on its efforts to sell prime real estate and the fact it can’t say when it might end its 10-quarter streak of sales declines- a big factor is how far Macy’s remains from fixing its crucial beauty business. Macy’s Chief Financial Officer Karen Hoguet told analysts on a conference call that cosmetics had been among the weakest categories for the retailer in the second quarter and that profit margins in the category had been pinched.

Cosmetics, fragrances and hair products are essential drivers of shopper traffic for any retailer, which in turn is key to getting consumers to spend more. In recent years, Macy’s, like other department stores from Nordstrom (jwn) all the way up to Neiman Marcus, have lost a ton of market share to the likes of LVMH’s (lvmhf) Sephora and Ulta Beauty (ulta) as customers have gravitated to a less didactic way of shopping for beauty products. Women, who make up as much as 80% of a department store’s clientele often see beauty shopping as “me-time,” and any damage to that side of the business is disproportionately painful.

Macy’s has been trying at lest. It has been testing an “open sell-selling” to beauty or self-serve approach at some stores, realizing at last that many customers no longer like the old department store approach of having to sit in a chair and let a store worker control the experience. The company bought high-end specialty chain Bluemercury in 2015 for $210 million and is testing out how to incorporate Bluemercury and its products into more stores. About 20 of 650 Macy’s stores have a Bluemercury. (Macy’s said that the comparable sales at Bluemercury’s stand-alone stores had been strong.)

“We’re figuring out how to make it work within our stores,” Macy’s CEO Jeff Gennette told Fortune in an interview.

But that gets to why investors are losing faith in Macy’s: it always seems to be testing things with little payoff to show for it so far. It’s judicious for Macy’s to proceed with caution, but at the same time, every second means more market share drifting to rivals: in its most recent quarter, Ulta’s comparable sales rose 14.3% and you can bet a good chunk of that increase came at Macy’s expense. Even vendors are hedging their bets: Estée Lauder Cos (el) recently started selling MAC products at Ulta, overcoming years of hesitation over Ulta’s strip mall concentration.

Still, Gennette, a 34-year Macy’s veteran who became CEO in May, says that the success Macy’s has had in “open-selling” in the women’s shoe department and in how it sells fine jewelry gives him reason to be confident about success in that way of selling beauty products. Macy’s is working with vendors on how to figure out open-selling and training store workers to sell and speak knowledgeably about a number of brands.

“Beauty is much more complicated than those other two businesses but our commitment is as deep,” Gennette says in reference to women’s shoes and fine jewelry.

Yet successful deployment of more Bluemercury stores within Macy’s for instance could mean a boost for shopper traffic since Bluemercury offers spa services. (It’s worth noting that J.C. Penney’s (jcp, -19.00%) large salon and spa business is successful, but not enough for that chain to enjoy overall sales increases.) What’s more, Macy’s is unveiling a new loyalty program in October that will aim, in part, to spur beauty sales. There too, Macy’s is going up against formidable competitors; Sephora and Ulta each have massively successive loyalty programs that will be hard to rival.

At the same time, he knows how much upside there is if Macy’s pulls this off.

“If we can have a (solution) where we can grow our beauty business, that will be a real jump-start to the business to the balance of the building,” he said. And that might start to mollify anxious investors.

In Global E-Commerce, The Race to Solve the "Last Mile."