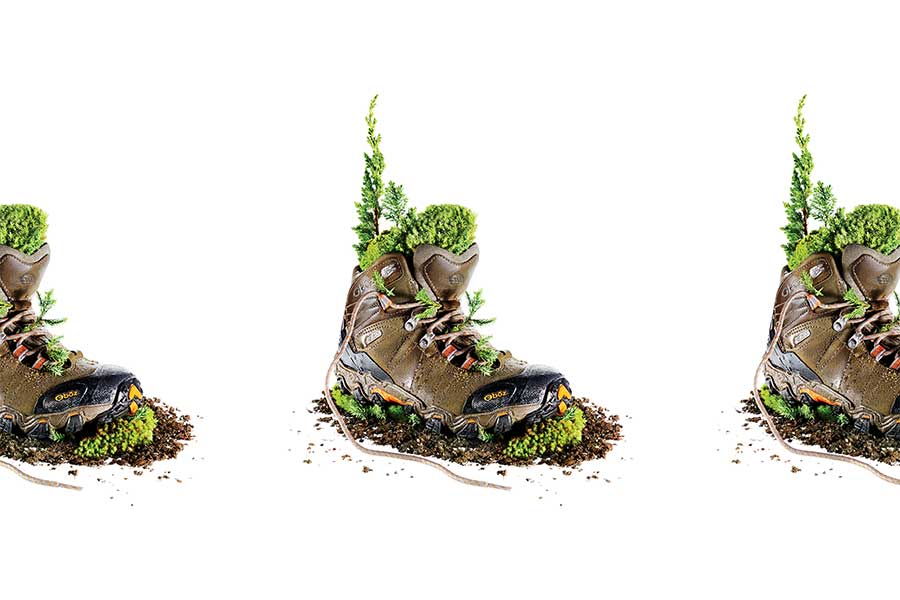 A new store opened in the suburbs of Pittsburgh in September. Built to resemble a rustic—albeit enormous—country cabin, the 50,000-square-foot space is really eight stores in one, each devoted to a different outdoor or adventure activity, such as camping, fishing, or paddling. But there’s more than just goods on shelves.

The cycling shop, for example, sells bikes, but also offers repairs and rentals. Climbing instructors don’t just fit customers for climbing shoes; they facilitate test runs on the store’s 30-foot climbing wall. There’s even a concierge on hand, advising shoppers about local parks, classes, and environmental volunteer opportunities. Employees aren’t just there for the transactions but to foster a community around America’s 640 million acres of parks, forests, and wildlife refuges. One percent of sales from this store, called Public Lands, goes toward a fund supporting conservation efforts led by national and local nonprofits, including the Conservation Alliance and Allegheny CleanWays.

Public Lands, which is opening a second location, outside Columbus, Ohio, in December, and has a growing e-commerce arm, is a new retail concept from Dick’s Sporting Goods. The athletic giant, which has 852 stores across the United States and brought in $9.6 billion in revenue in 2020, is known for courting the proverbial soccer moms, golfing dads, and their Little League-playing kids. But Public Lands, which is headed by Todd Spaletto, former president of the North Face, is aimed at a new demographic: the kinds of urban professionals who are increasingly invested in supporting retailers that reflect their values.

The Public Lands store in Cranberry, Pennsylvania, stands in the same spot as Dick’s first Field & Stream outpost, a line of stores that the company has operated since 2013. Field & Stream has always catered to outdoor enthusiasts as well, but of a different sort. Public Lands marks a major departure: It is no haven for hunters. Nor, increasingly, are the majority of Dick’s stores, which have been whittling down their firearms inventory as the company plays a demographic long game.

America is used to the “thoughts and prayers” routine that follows a mass shooting. But when a gunman murdered 17 people at a high school in Parkland, Florida, in 2018—and Dick’s discovered that he had purchased a shotgun from one of its stores—the company abandoned the typical corporate script. Instead, then-CEO Ed Stack (son of founder Dick Stack) decided to permanently stop selling semiautomatic weapons.

Stack joined gun-reform group Everytown for Gun Safety, as part of its council of business leaders, and urged Congress to act on gun control. His stores, meanwhile, began systematically pulling all guns off their shelves. Today, just 13% of Dick’s stores sell firearms, and only those made specifically for hunting, and the company has drawn down its Field & Stream stores from 35 in 2018 to 21.

That was “a momentous time in our company’s history,” recalled Dick’s then-president and current CEO Lauren Hobart, speaking at Fast Company’s Innovation Festival in October. But it certainly wasn’t easy. Major gun companies cut ties, and the NRA proclaimed that the retailer was “punishing law-abiding citizens.” Dick’s was also the subject of a sustained, if not broad, customer boycott. “People who are angry have a longer memory, perhaps, than people who are supportive,” said Hobart. The company estimates that its decision to stop selling automatic weapons cost it about $250 million in revenue.

But eventually, the move began to pay off. “I think they recognized that their core consumer was not a gun buyer, not a hunter,” says Matt Powell, senior analyst for the sports industry at NPD Group. Dick’s revenue rose nearly 10% in 2020; in the second quarter of 2021, sales were up 21% over the same quarter in 2020, and 45% over 2019. There are other reasons for that uptick, including a pandemic-related surge of interest in outdoor activities and smart investments in private-label brands—particularly for women. “You make a lower profit margin on guns,” notes Powell, “than you do on sneakers or baseball bats.”

Spaletto says it wasn’t a straight line from the company’s vocal anti-gun stance to the new store concept. “Public Lands is an expression of a consumer insight, purely,” he says. Still, the protection of public lands is, in many ways, a hot-button issue. Spaletto is interested in marshaling the company’s resources, for example, to help protect Utah’s Bears Ears National Monument, which the Trump administration reduced in size by 85%. (Biden’s White House has since restored it.) Patagonia, a brand partner of Public Lands, has been outspoken about Bears Ears as well, pulling out of an industry trade show in Utah to protest the state’s collaboration with the Trump administration. Before the 2020 election, it also covertly printed “Vote the assholes out” on the labels of some of its shorts.

Public Lands may not become so pointed in its advocacy. (Dick’s has steered clear of political contributions in recent years, though Stack reportedly considered a third-party presidential run in 2020.) But with the new Public Lands fund, Spaletto is positioning the retailer to stand alongside mission-driven outdoor companies like Patagonia. “Brands have to pick a lane today,” Powell says. If they don’t align their values with those of their customers, consumers “will take their business elsewhere.”

Hobart said that Dick’s won’t get mired in every political debate. But the company will speak up when it can add unique perspective. After the Parkland shooting, she said, “We developed a voice that we didn’t have before.”

Burberry launches rental and resale with My Wardrobe HQ